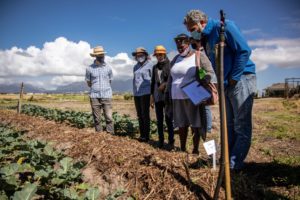 The programme is training 20 people to set up PGSs throughout South Africa that will help build more connected local food systems, provide organic assurance for consumers and support organic growers in sharing knowledge.

“Participatory Guarantee Systems (PGSs) are locally focused quality assurance systems. They certify producers based on the active participation of stakeholders and are built on a foundation of trust, social networks and knowledge exchange” – IFOAM Organics International, the global umbrella organisation of the organic agriculture movement.

Colleen Anderson, SAOSO Secretariat, said: “Third-party certification for organic produce is often too expensive and administratively burdensome for smallholder farmers to attain. PGS is a consumer- and producer-based alternative, underpinned by the principles of shared vision, participation, trust, transparency, learning process and horizontality.” 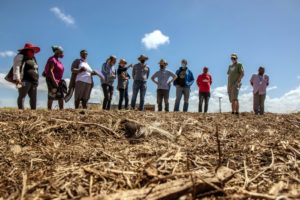 Pollinators Babalwa Mpayipeli and Hazel Nyaba (2nd and 3rd from left) are joined by fellow farmers and clients in discussing the new mulching technique being utilized at Valota Farm as they transition away from conventional farming methods to organic practices as a part of the Cape Flats PGS’s farm visit.

It is one of five Knowledge Hubs for Organic Agriculture pursuing the goal of disseminating knowledge and shaping a network on a national, regional and continental level. The other four are implemented by GIZ in North, West and Eastern and Central Africa. KH SA is operating in Zambia, Namibia and South Africa with plans to extend the project to Malawi in 2021. The Stellenbosch-based Sustainability Institute provides support for the regional project implementation. SAOSO leads project activities in South Africa.

The pollinators, from seven provinces, are attending training sessions on ecological organic agricultural practices. Subsequent to this, they will set up PGS groups and advocate for organic production, all in support of sustainable farming practices in South Africa.
Organic production is increasingly viewed by international organisations, such as the United Nations, as a strategic way to address rural poverty, malnutrition and biodiversity loss, particularly in a time of climate change. 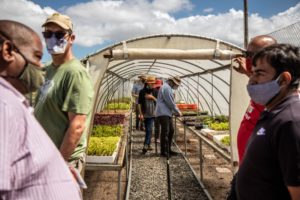 Sasha Mentz, the programme coordinator, states that “PGS SA is receiving an increasing volume of inquiries about how to set up PGSs because consumers want assurance that produce is grown organically. We are also seeing a growing demand from small-scale producers for training on ecological and organic agriculture practices.”

Organic production builds soil health and fertility by increasing the carbon content of the soil, boosting its ability to retain water and enabling effective nutrient cycling. This results in plants that are rich in nutrients and more resistant to drought, pests and diseases. Healthy soils retain and store more carbon, helping to mitigate climate change. The African Union Commission has established an African organic farming platform to identify best practices in the organic sector (Ecological Organic Agriculture Initiative – EOA-I). It supports attainment of several of the Sustainable Development Goals.

The pollinators will each establish and support a new PGS group and train stakeholders in their areas to replicate the system across South Africa. On completion of training, they will continue to support the activities and growth of the newly created PGS group providing ongoing extension support to organic farmers. Municipalities will be approached to provide further support to PGS groups as they can play an important part in local economic development.

Mentz notes that, “We urgently need to transition from large-scale, chemical intensive and monocropping farming systems to support localised chains of organic production. PGS can play a key role in encouraging and supporting organic agriculture through local market customer demand.”