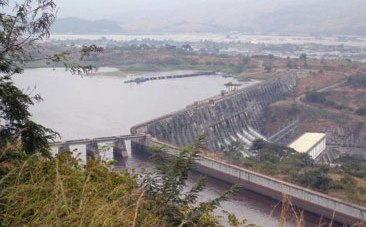 The Inga gorge and dam complex on the Congo River in the Democratic Republic of the Congo, showing the current hydro-electric facilities, which are run off the river schemes, meaning that only a fraction of the main river flow is diverted through the power plants. (Photo: UNEP DR Congo)

The Cabinet has approved the treaty on the Grand Inga hydropower project between South Africa and the DRC, paving the way for what could become the largest hydroelectric project in the world, with the potential to power half the continent.

Minister in the Presidency for Planning, Monitoring and Evaluation Jeff Radebe made the announcement in Pretoria on Thursday following the Cabinet’s latest fortnightly meeting, which took place in Cape Town on Wednesday.

The Grand Inga project will seek to harness the power potential of the Congo River, sub-Saharan Africa’s greatest waterway. Once all seven of its planned phases are complete, it is expected to generate a massive 40 000 megawatts (MW) of renewable power.

Two existing dams, Inga 1 and 2, have been in operation since 1972 and 1982 respectively, together generating nearly 1 800 MW. The next phase of the Grand Inga project, Inga 3, is expected to cost in the region of US-billion and produce around 4 800 MW of electricity.

Subsequent phases, adding up to an eventual total capacity of 40 000 MW, will allow countries in southern Africa, north-east Africa and parts of west Africa to benefit from production at the site.

The Grand Inga treaty, signed by South Africa and the DRC in October, will now be tabled in Parliament. The treaty provides the framework for the facilitation of power generation from the Grand Inga project and its delivery to the border between the DRC and Zambia.

According to Radebe, the ratification of the treaty paves the way for the development of Inga 3, which will provide 2 500 MW of electricity to South Africa and contribute to regional integration, energy security and economic growth in an environmentally sustainable manner.

“The project has the potential to supply clean and affordable imported hydroelectric power to meet the needs of the DRC, South Africa and surrounding countries,” Radebe said.

“This represents one of the most ambitious projects ever undertaken on the African continent, and one which will long be a resounding symbol of the rise of Africa and her people.”