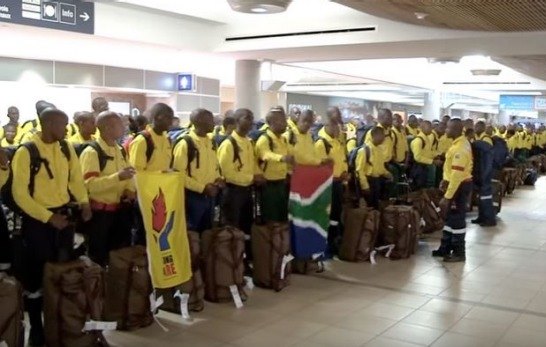 Canada is hammered by excessive fires and our skilled firefighters are helping.

South Africa has answered the call and is providing aid to Canada. 300 of their firefighters have come to help with the Fort McMurray Beast, landing at Edmonton International Airport a week ago. Anyone who’s ever flown between Canada and South Africa knows that you’re pretty much semi-conscious when you finally arrive after a 24-hour flight. You are jet-lagged out of your skull and want only to collapse, unless you fly in deluxe class, which you can be sure the South Africans did not.

So what did the 300 do on arrival? They danced and chanted, right there and then in the middle of the airport. Mostly young men, with a few young women, looking suitably dynamic in bold yellow shirts and black fire-fighting boots, carrying backpacks that probably constituted their entire personal luggage, they put on a show and a half:

Proud, confident, well-trained, the 300, Canada has been told, have arrived to give back. With their government’s full support, they’re repaying us for the backing ordinary Canadians gave them (or more likely their parents) during the long, bitter, struggle against apartheid. Talking about parents, I’d bet dollars to doughnuts that Rachel Notley’s family once boycotted apartheid South Africa’s wine and oranges, just as my own household did.

And that’s the biggest story of Canada’s contribution to fighting South African apartheid. Former prime minister Brian Mulroney has been acclaimed often enough by now for his role in the struggle, which while real, was also both brief and exaggerated. The real unsung warriors of Canada’s contribution to the end of apartheid are tens of thousands of ordinary Canadians, whether on their own or through anti-apartheid groups, solidarity groups, church groups, trade unions, or the NDP.

For years this exemplary slice of civil society boycotted South African products, put pressure on Ottawa to be more proactive, and kept in touch with South Africans themselves, giving them hope in their darkest days that the world had not forgotten, although much of the world in fact had. They were the real Canadian heroes of this story, and I hope the 300 learn about them. 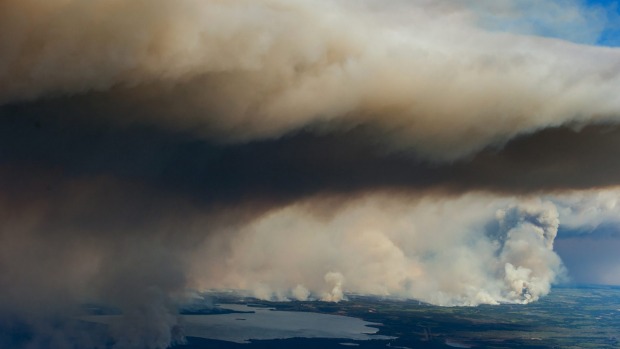 A huge plume of smoke from wildfires burning rises around Gregoire Lake in this aerial photograph taken above Fort McMurray, Alberta, Canada on May 6, 2016. Image: Bloomberg

The 300 are all firefighters in South Africa, working, as The Globe’s Africa correspondent Geoffrey York explained the other day, for a government-funded group called “Working on Fire.” South Africa today is in grave trouble in many ways, having come nowhere near fulfilling its potential since Nelson Mandela was elected president in 1994 in the country’s first-ever free and democratic election.

South Africa has nothing like the infrastructure it needs to fight fires. Global warming has afflicted much of Africa, including South Africa, with drought and fires of their own. South Africa has an official unemployment rate of nearly a third of the labour force and youth unemployment of fully half the country’s 15 to 24-year-olds.

No one would have predicted these appalling figures when Mr. Mandela took over. But of course who would have guessed that so many of South Africa’s former freedom fighters would become millionaires, that millions of South Africans would still live in poverty, and that the country would be ruled by venal politicians in a government characterized by deep corruption and cynicism. 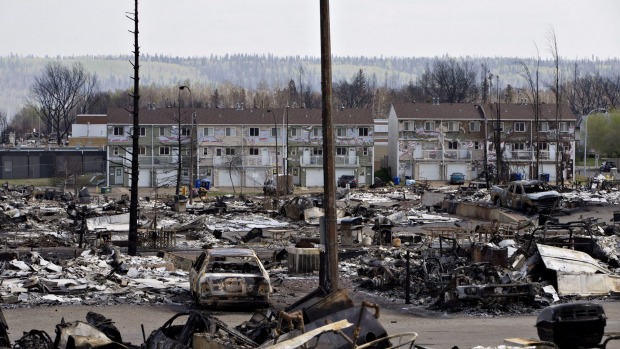 “Working on Fire” has taken a tiny but useful bite out of the awful unemployment total. So far it’s trained 5,000 firefighters, which gives them meaningful work and makes the country just that much safer. But we must not picture here a fire hall in Edmonton. Many, perhaps most, small towns in South Africa lack water and proper fire-fighting equipment. At home these firefighters get a stipend of a mere $150 a month. For their month in Alberta, the 300 will get something over $1,500 each, ten times more than at home but a bad joke for any Canadian firefighter. All this offers a telling insight into the comparative standard of living in Canada and South Africa – and yet South Africa is among the most prosperous and developed of African countries. Canadian officials later said they would bump up the firefighters’ pay.

Before they boarded that Canadian plane, the South Africans got 10 days of special training to get them ready for the realities of the Fort McMurray wildfire, the like of which few in the world have ever encountered. The firefighter-dancers who arrived in in Edmonton certainly seemed to be suffering no lack of self-confidence or willingness to throw themselves into the fray in whatever capacity they’re needed.

This is an unbearably sad time for many Albertans, not least those returning evacuees who have lost their homes to The Beast. At the same time, the South Africans may still be having the adventure of a lifetime, though I expect that their arduous work will soon lead to sheer exhaustion. Still, I can’t help hoping that at least some Albertans will meet the South Africans. Somehow, I’m sure they’ll find more in common than they themselves might anticipate. It would be sweet to think they may find strength and comfort from each other’s adversity and determination. Dancing together would be a fine beginning for a new future.

By Gerald Caplan. Source: The Globe and Mail