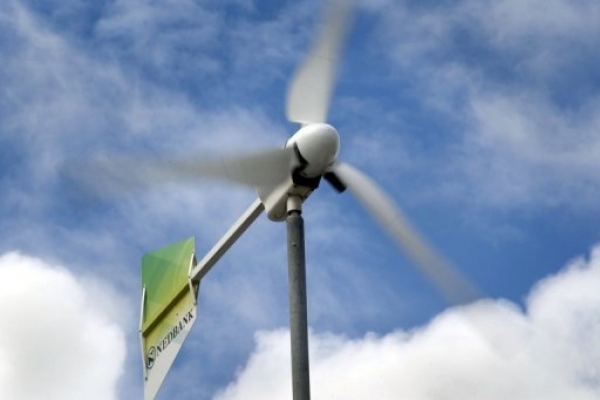 A wind turbine spins outside Africa’s first bank branch partially powered by wind, in Du Noon, about 20 kms from the centre of Cape Town in 2011. South Africa on Tuesday launched its first verified wind atlas which maps out potential hotspots as a tool for wind farm developers as the coal-hungry country pushes toward renewable energy.

South Africa has launched its first verified wind atlas, which maps out potential hotspots as a tool for wind farm developers as the coal-hungry country pushes toward renewable energy.

The Wind Atlas for South Africa, launched Deputy Energy Minister Barbara Thompson on Tuesday, brings together 30 years’ worth of data verified over a year by 10 measurement masts and data collection systems installed in selected areas of the Eastern, Western and Northern Cape provinces in August 2010.

The data is graphically displayed on the project website, enabling its users to predict key parameters such as wind speed, frequency, direction and estimated power output, and will be updated as measurements continue over the next two years.

Speaking at Tuesday’s launch, Thompson said the initiative was in line with the government’s objective of meeting the needs of a fast growing economy “without compromising our commitment to sustainable development”.

Energy from renewable sources will be expected to make up a substantial 42% of all new electricity generation in South Africa over the next 20 years, according to the government’s Integrated Resource Plan (IRP), a 20-year projection on electricity supply and demand in the country.

As it stands, about 90% of South Africa’s energy is produced from burning coal, which has a negative impact on the country’s carbon footprint.

Thompson noted that, based on studies done in the past, South Africa is widely acknowledged to have good wind energy resources along its coast and in some inland areas.

Overcoming the lack of information

There remained, however, a dearth of verifiable quantitative assessments to back up these findings.

“As we embark on our ambitious renewable energy programme, the need for reliable, accurate and representative data on wind becomes critical,” Thompson said.

“One of the major challenges hampering large scale utilization of wind energy is knowing the practical exploitable wind energy potential in the country.”

The wind atlas overcomes this obstacle, Thompson said, providing data that will “help developers in planning and project preparation of bankable projects, siting of turbines as well as siting of wind farms”.

At the same time, the project is building local capacity in wind resource assessment through the participation of the South African Weather Service, the University of Cape Town’s Climate System Analysis Group (CSAG), and the Centre for Scientific and Industrial Research (CSIR), managed by the South African National Energy Development Institute (SANEDI).

‘This is world class’

The Technical University of Denmark’s (DTU’s) wind energy department is also involved, with funding of R22-million to date provided by South Africa’s Department of Energy, the Danish Embassy in SA, and the UN Development Programme’s Global Environment Facility.

The DTU’s Jens Hansen said that a mesoscale climate model with a 5km x 5km resolution had been created, using 30 years’ worth of meteorological global reanalysis data, in order to generate the wind atlas.

The atlas had then been verified against the 10 stations set up to measure wind speeds 80 metres above ground level. Hansen said the correlation between the atlas and real measurements was pleasing.

“This is world class; there is nowhere in the world that has a better wind atlas than this one.”

SA behind in wind energy

The data, which is available online at no cost, had reflected an average 5.6 percent difference between projections and verified measurements.

Help the poor help themselves

“If we can successfully exploit the wind energy potential these provinces offer, we can provide impoverished communities in these provinces the opportunity to lift themselves out of poverty,” Thompson said.

Last week, the government opened a second round of bidding for private wind producers, whom it wants to add to the electricity grid powered by the state utility Eskom which struggled under a wave of blackouts in 2008.