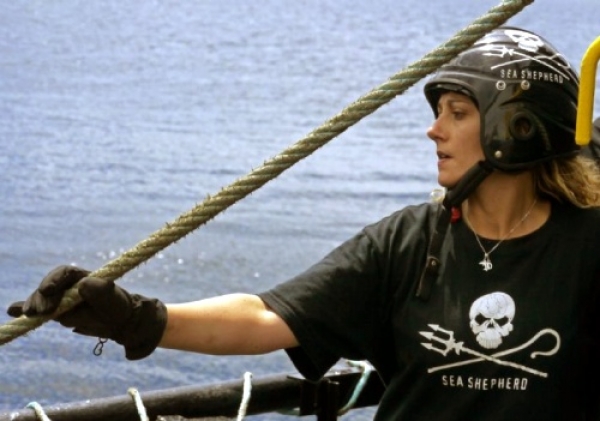 Rosie and the Sea Shepard in Antarctica.

There is a war going on in Antarctica, and South Africa’s Rosie Kunneke is one of the soldiers fighting the good fight. She recently returned to the country after 94 days at sea, participating in the world famous reality television series Whale Wars.

This popular Animal Planet production follows captain Paul Watson, founder of the Sea Shepherd Conservation Society, as he and his crew aboard their various vessels harass Japanese whalers off the coast of Antarctica.

Willemien Calitz from the Green Times met Kunneke in Cape Town and heard her heart-rendering story. Her involvement with Whale Wars and Sea Shepherd started when she watched The Cove two years ago:

‘The movie showcases the research done on the relationship between humans and animals. I couldn’t watch that and not do something about it. It was impossible.’

Kunneke spent many years as a businesswoman, an operations manager to be precise, until she realised she wasn’t really happy. She quit her job and started participating in Sea Shepherd’s activities. ‘I wanted to use my abilities and my energy at an organisation that’s hands-on and pro-active,’ she says.

In September 2010 she went to Japan to document the dolphin slaughter by blogging for Sea Shepherd:

‘Don’t support places where your kids can swim with dolphins. These dolphins are exported from Japan and are just cover-ups for the bigger slaughter that’s going on.’

In slaughter season the Japanese kill up to 100 dolphins in a single day. The hunters huddle up in banger boats about 40 kilometres off the coast of Japan past which dolphins migrate annually.

‘Dolphins use echo-location to migrate, which means they send out messages by making a certain sound. The Japanese hunters then bang against poles in the water to confuse them.’

The coastline makes a natural funnel and the hunters then close down these poor creatures in a cove.

‘The dolphins become so stressed that some of them immediately drown.’

Dolphin trainers come to view the catch and pick the best-looking dolphins to export them to other countries. They are exported in small crates with only enough water in to survive. For the rest of their lives these wild animals must now swim in small circles. Dolphins are very sensitive to sound and a crowd at an aquarium can really upset them. Usually they get drugged daily to relax. In captivity like this they only survive for six years, rather than the 20 years they can in the wild.

The rest are speared to death

Those who are not selected are immediately killed in the most brutal manner imaginable.

‘The hunters thrash spears into the dolphins’ blowholes, so they are literally smothered. This is done so violently, that their spines are severed and they can’t swim up for air anyway.’

They cover these covens with sails, because they don’t want people to see it. In a year they kill up to 23 000 dolphins in Japan.

‘They claim they do this as part of their culture, but they do it for the meat and the money. Dolphin flesh contains so much mercury, that these people are poisoning themselves. The Japanese government are also blaming the dolphins for the little fish stock left in the area, but humans are eating those fish.’

The destruction caused by the trawling industry is also something that concerns her deeply.

‘If people on land could see how destructive the fishing trawlers are towards the environment and wildlife at sea,  this would be stopped immediately.’

‘Some of those nets are more than a kilometre long. It took us eight hours just to drag in the one side of the net. I don’t even want to start on by-catches; so many fish and bird life are caught and thrown back dead into the sea’ 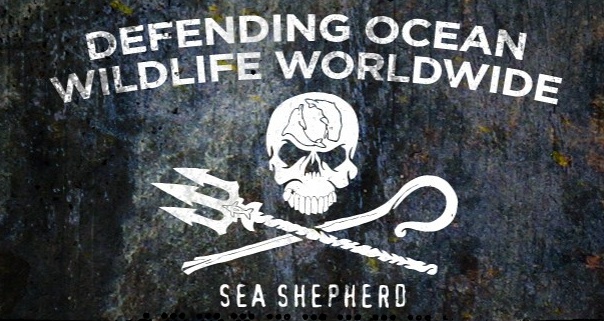 Paul Watson noticed Kunneke in Japan and invited her to be a deckhand on board the ship for the fourth Whale Wars season, themed Operation No Compromise. It’s Watson’s 7th year of interfering with the whalers and he will not accept a compromise with them, he demands they stop.

In 1986 a moratorium was issued on the killing of whales in Antarctica. However, a loophole was left for whaling for scientific research purposes.

‘The Japanese claim that their whaling is legally accepted research, but we know better. It’s only a cover for banned commercial whaling,’ Kunneke says. ‘The part of the Southern Ocean where the Japanese are whaling, is  a whale sanctuary.’

This year the Japanese whalers, subsidised by their government, set their target at 935 Minke whales, 50 Fin whales and 50 Humpback whales. Paul Watson and his crew made use of three ships, the Steve Irwin, the Bob Barker and the Gojira (aka Godzilla) to track down the big Japanese factory ship, the Yushin Maru, and its three harpoon ships. Their aim was to find the Yushin Maru, stay in its slipway and prevent the harpoon ships from transferring whales across to be processed.

‘You won’t believe how effective the processing ship is. In less than an hour an entire whale can be chopped up and packaged. Whale meat goes off extremely quickly, so they only have a short window of time to process the meat. That’s when we interfere; it’s not economical for them to kill whales anymore. This literally is a war. If any of the harpoon ships pick us up on their radars,  notify  the factory ship know, who try to dodge us.’

This is where the smaller ship, the Gojira plays such an important role. It’s not easily detected by the Japanese  and is perfect for scouting. 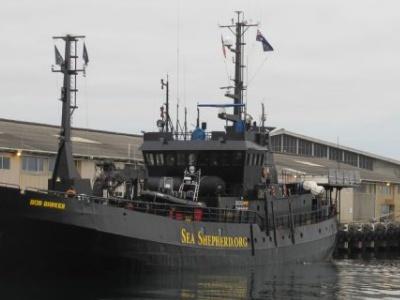 After ten days the hunt is called off

On 10 February this year, the Gojira located the factory ship. The crew physically parked themselves between the harpoon ships and the Yushin Maru and threw biodegradable ammo, like smelly butter and slippery methyl cellulose at it to disturb the Japanese. After ten days of being in the factory ship’s slipway, the Japanese called off the hunt.  The teams of Whale Wars managed to stop the Japanese at 172 whales, a small fraction of what their target was.

‘The Japanese currently have about 6000 ton of whale meat in their possession, indicating that the delicacy is losing its value, as customers become more educated. Perhaps this, combined with the tsunami chaos and the new fuel regulations in Antarctica, will finally halt the killing.’

‘The ecosystem is like a chain, if you take out one link, the whole thing collapses. Whales are one of those important links.’

As a deckhand, Kunneke had to make sure everything on the ship was in a working condition and clean.

‘It’s an eight-hour day, seven days a week job to be out there where the action is. As deckies we always used to say we work the hardest, but we have the most fun.’

For about three months they never came into contact with anyone but their crew of 37.

‘It was really hard to be away from our families over Christmas. But the hard work, injuries, seasickness and bad weather was all be forgotten when we sailed past a whale and her baby.’

Animals and humans have the same level of pain

Kunneke is back in South Africa to spend some quality time with her two English bull dogs, before she goes on her next life-changing mission. What is her next plan? She plans to soon start her own vegan take-away store in Cape Town.

‘I am a vegan because on the level of pain and suffering, animals and humans are the same. My friends sometimes ask me if I’m not being too radical, but there is no more time to ask nicely to take care of our animals. If slaughterhouses had glass walls, everyone would be vegetarian.’

Kunneke says 80% of our corn production is used to feed cows, pigs and chickens so we can eat them.

‘That corn could rather be given to the hungry and poor. Vegans can also eat great food, the chefs on the boats cooked amazing vegan recipes.’

At the Green Times we salute her and the brave Captain Watson, who stop at nothing  to create a more compassionate planet.