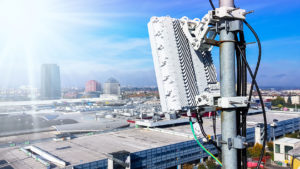 Activists have criticized the draft policy, that will permit mobile networks and other licensees the right to select, enter, and use public or private land for the placement of their network infrastructure.

What does this really mean for the ordinary resident of eThekwini? This means that this policy is a direct violation of your constitutional property rights. This ‘rapid deployment’ of 5G towers all over South Africa is in further conflict with a number of clauses in the Constitution linking to property rights as well as with municipal by-laws.

The public had 30 days to comment on the policy which ended on 22 August 2020.  Five months later there has been no feedback from the Department of Electronic Communications and Digital Technologies regarding the outcome of the thousands of submissions made by South African citizens.

Section 24 of the South African Constitution enshrines the universal ‘right to an environment that is not harmful to their health or well-being and to have the environment protected for the benefit of present and future generations’.

The health and wellbeing of our citizens are at stake and in south Durban, we are no strangers to the fight against the planning department for haphazardly granting the applications of telecommunication companies.

Despite vehement objections from entire communities opposing cellular towers from being erected in their neighbourhoods, they are given the thumbs up by officials. Those in the South Durban basic live in heavily polluted areas where residents suffer from cancer and other auto-immune diseases. It is a scientific fact that electromagnetic frequency (EMF) radiation is harmful. However, the current scientific debate concerns how much radiation is harmful and what kind of harm it causes. The industry and government adhere to safety guidelines set up more than 25 years ago.

5G radiation is an untested technology, and there is growing evidence that certain individuals are already sensitive to 4G radiation. While there is already overwhelming evidence that EMF radiation contributes towards auto-immune conditions, it is suspected that 5G EMF emissions will be far worse.

Today the KZN government has convened an online discussion titled ‘Do 5G Towers cause COVID-19?’. While we understand that this discussion is aimed at addressing the widespread conspiracy theories around 5G, the government is asking the wrong question.

The question should be: ‘Is 5G proven to be safe?” The answer is a resounding ‘NO”. Tests conducted on the biological effect of 5G on people and the environment has raised alarm bells around the world. This research is suppressed and combatted by the powerful mobile telephony industry.

However, our national and provincial government is so beholden to the money generated by the rapacious cellular telephony industry that they have, once again, ignored issues such as failed public participation, human rights violations, constitutional rights abuses, corruption and coercion and a general indifference to the rights of the people of the country.