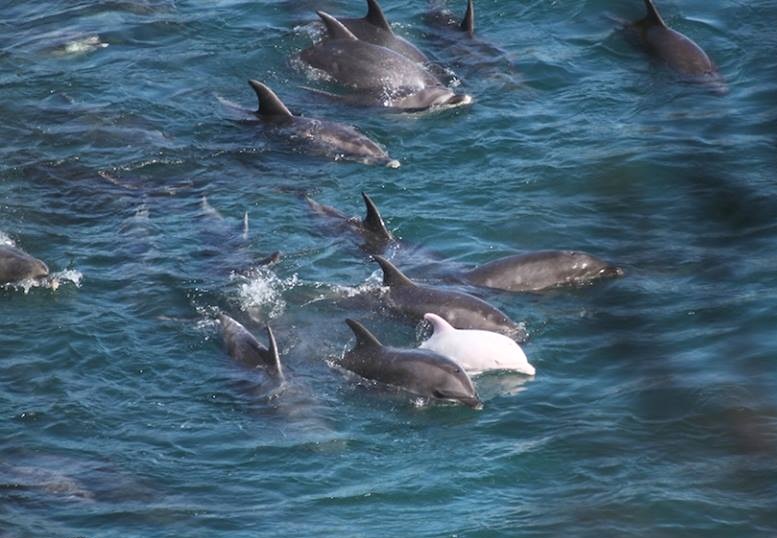 A baby albino dolphin, part of the 250+ dolphins captured in Taiji, Japan has been taken from its mother and placed in the Taiji Whale Museum.

According to Cove Guardian, Karla Sanjur the dolphin looks “like an angel with fins,” and Ric O’Barry, the director of the Dolphin Project has decided to call this poor little dolphin “Angel.”

Angel represents a huge prize for the dolphin hunters, and it is likely that Taiji Whale Museum will keep little Angel for their own promotion and to attract tourists. A rare albino dolphin like Angel is likely to bring a great deal of interest and be a freak show attraction in the museum, which not only houses live dolphins, but also sells whale and dolphin meat in the gift shop.

Angel was taken from its mother to the Taiji Whale Museum, a particularly stupid act as the calf’s likelihood of survival in captivity would be enhanced if the mother was with Angel. Angel’s mother will be slaughtered and sold for meat, while Angel will sit in a tank to be a freak on display.

The whaling museum is owned by the Taiji town government and brokers dolphins all over the world, including providing dolphins for the one hundred or so dolphinariums in Japan.

Albinos in the wild face many problems.  They are conspicuous, and so are easier for predators to spot and catch.  Without skin pigmentation, they are more susceptible to skin problems from the sun. Sunburn becomes a real problem to captive dolphins and whales.

But Angel doesn’t deserve a life sentence to captivity.

The hunts for dolphins in Taiji must be stopped. Sign the petition over at Causes, and help release Angel and end this slaughter.