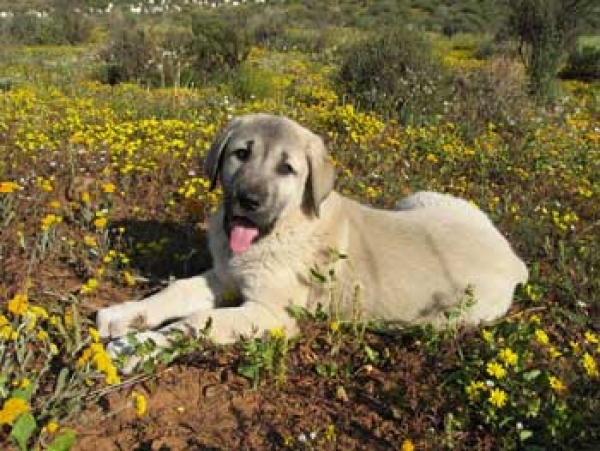 It is essential for livestock farmers to find non-lethal methods to protect their animals from predators. The Anatolian Shepherd Dog fits this bill perfectly.

Anatolians have the ability to protect livestock through their physical attributes of size, strength, good eyesight, sense of smell and hearing and their dedication and loyalty to their adopted families. The leopard is a flagship species that represents the need for conservation of its entire ecosystem.

The leopard population in the Cape Mountains is under serious threat due to habitat loss and human persecution. Many leopards in Southern Africa live outside protected areas on farmlands. Worldwide, the Anatolian is a guardian of livestock and has been around for as far back as the Mesopotamian period.

The Anatolian is a muscular breed of Turkish descent, with a thick neck, broad head and sturdy body which was bred to be independent and forceful, and responsible for guarding its owner’s livestock without human assistance or direction. These traits make it challenging as a pet, therefore owners must socialise them so that they can be companions.

The average life span of the dog is about ten years. The Cape Leopard Trust is encouraging farmers to have an Anatolian dog on their farms as one of the ways to ease conflict between farmers and predators The dogs are raised with the herd from six to eight weeks of age and instinctively bond with the animals they are kept with. They are calm, confident dogs that continually stay with the herd and are very sensitive to the changes in normal herd behaviour or routine, and as such will investigate and aggressively confront any intruders or threats to the herd. Anatolians possess the three main behaviour traits that a livestock guard dog must possess: trustworthiness, attentiveness and protectiveness.

The leopard currently fills the role of apex predator in the Cederberg and the rest of the Western Cape; however, its conservation status remains uncertain. The species is regularly removed or exterminated from farms with little knowledge of population or genetic status, whether these removals are sustainable or whether the factors giving rise to conflict are established. Preliminary studies show that leopards in the Cape differ morphologically as well as genetically from leopards elsewhere in Southern Africa. Research also shows that population sizes are far smaller than estimated.

The Cape Leopard Trust is an organisation aimed at facilitating the conservation of the Cape’s predator diversity through conservation, research and tourism. One of their key aims is to investigate human-wildlife conflict issues and to help develop management strategies to resolve these issues to the benefit of all parties.

‘The Cape Leopard Trust is a leader in conservation and, as one of their sponsors, Leopard’s Leap is proud to be involved with such a worthy cause,’ says Hein Koegelenberg, CEO of Leopard’s Leap.