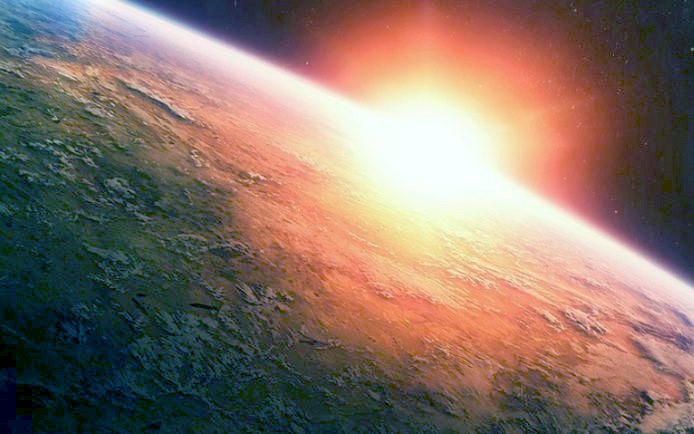 Before you panic, the good news is that the scientists behind the model don’t believe it’s predictive. The model does not account for the reality that people will react to escalating crises by changing behavior and policies.

But even so, it’s a sobering wake-up call, which shows that business-as-usual guarantees the end-of-the-world-as-we-know-it: our current way of life is not sustainable.

The new models are being developed at Anglia Ruskin University’s Global Sustainability Institute (GSI), through a project called the ‘Global Resource Observatory’ (GRO).

The GRO is chiefly funded by the Dawe Charitable Trust, but its partners include the British government’s Foreign & Commonwealth Office (FCO); British bank, Lloyds of London; the Aldersgate Group, the environment coalition of leaders from business, politics and civil society; the Institute and Faculty of Actuaries; Africa Development Bank, Asian Development Bank, and the University of Wisconsin.

This week, Lloyds released a report for the insurance industry assessing the risk of a near-term “acute disruption to the global food supply.” Research for the project was led by Anglia Ruskin University’s GSI, and based on its GRO modelling initiative.

The report explores the scenario of a near-term global food supply disruption, considered plausible on the basis of past events, especially in relation to future climate trends. The global food system, the authors find, is “under chronic pressure to meet an ever-rising demand, and its vulnerability to acute disruptions is compounded by factors such as climate change, water stress, ongoing globalisation and heightening political instability.”

Lloyd’s scenario analysis shows that food production across the planet could be significantly undermined due to a combination of just three catastrophic weather events, leading to shortfalls in the production of staple crops, and ensuing price spikes.

Near future massive increase in wheat, maize, soybean and rice…

In the scenario, which is “set in the near future,” wheat, maize and soybean prices “increase to quadruple the levels seen around 2000,” while rice prices increase by 500%. This leads to rocketing stock prices for agricultural commodities, agricultural chemicals and agriculture engineering supply chains:

The scenario analysis demonstrates that a key outcome of any such systemic shock to the global food supply — apart from “negative humanitarian consequences and major financial losses worldwide” — would be geopolitical mayhem as well as escalating terrorism and civil unrest.

The purpose of exploring such scenarios is to prepare insurers for possibilities that are now more likely than previously assumed. The Lloyd’s report points out:

“What is striking about the scenario is that the probability of occurrence is estimated as significantly higher than the benchmark return period of 1:200 years applied for assessing insurers’ ability to pay claims against extreme events.”

That leading insurance companies are now attempting to factor in potential losses from such crises is a major step forward in pushing the financial sector to recognise the dark-side of the current system of fossil fuel dependence.

“A global production shock of the kind set out in this scenario would be expected to generate major economic and political impacts that could affect clients across a very wide spectrum of insurance classes.”

It would have “major consequences for companies’ investment income,” with the potential to “generate losses that span many years.” It would also result in political instabilities that take “decades to resolve” while imposing “greater restrictions on international business.”

The scenario was developed for Lloyds by the Anglia Ruskin University team with the British Foreign Office’s UK/US Task Force on Resilience of the Global Food Supply Chain to Extreme Events.

The Foreign Office’s food resilience Task Force began to come together late last year. An FCO document from February 2015 for a Task Force workshop throws light on its rationale, direction, and participants.

“The taskforce is looking at plausible worst case scenarios of disruption to the global agri-food system, caused by extreme weather events,” the document explains. Taskforce projects aim to “improve understanding of how changing extreme weather events (severity, type, frequency, geographical impact) may impact on global food security” and to “identify how market and policy responses may exacerbate or ameliorate these effects.”

How would society respond?

Of particular concern to the FCO’s taskforce is to determine “how large shocks in agricultural production could occur (e.g. floods, droughts, wind storms),” how these would translate into “crop reductions,” and “how society responds to high food prices or limited local availability.”

On the US side, government involvement was limited to the Center for Integrated Modeling of Sustainable Agriculture and Nutrition Security (CIMSANS), which is supported by the US State Department, and USAID’s Famine Early Warning Systems Network.

I had been in touch with the Anglia Ruskin GSI team for a while, having previously reported on some of their work — and this month joined GSI as a visiting research fellow.

Earlier this year, I attended an invite-only GRO steering committee meeting of scientists, technologists, financiers, economists, and academics, where GSI’s Director, Dr. Aled Jones, delivered a detailed presentation on the modelling work done so far, what it implied, and where it was leading.

Dr. Jones was previously Deputy Director of the Programme for Sustainability Leadership at the University Cambridge, where he was Director of the British government’s flagship Chevening Fellowships Economics of Climate Change Programme, supported by the UK Foreign Office to deliver the FCO’s Strategic Framework. Jones also chairs a working group of the UK government’s Department for Energy and Climate Change’s Capital Markets Climate Initiative (CMCI).

Jones’ GRO initiative has received direct funding from the Foreign Office to develop its modelling capacity, and he is a co-leader of the FCO Task Force’s working group on ‘Impacts’, where he and his team apply the GRO models to assess the way crop reductions would affect global food security.

GRO is developing two types of model: an Agent-Based Model to explore short-term scenarios of policy decisions by simulating social-economical-environmental systems; and a System Dynamics Model capable of providing projections for the next 5 years based on modelling the complex interconnections between finite resources, planetary carrying capacity, and the human economy.

“The financial and economic system is exposed to catastrophic short-term risks that the system cannot address in its current form,” Dr. Jones told us.

He described GRO’s use of the Agent-Based Model to capture and simulate the multiple factors that led to the 2011 Arab Spring events.

By successfully modeling the “impact of climate-induced drought on crop failures and the ensuing impact on food prices,” he said, the model can then be recalibrated to “experiment with different scenarios.”

Model to 2040 on do-nothing trends

“We ran the model forward to the year 2040, along a business-as-usual trajectory based on ‘do-nothing’ trends — that is, without any feedback loops that would change the underlying trend. The results show that based on plausible climate trends, and a total failure to change course, the global food supply system would face catastrophic losses, and an unprecedented epidemic of food riots. In this scenario, global society essentially collapses as food production falls permanently short of consumption.”

Another steering committee member raised their hand: “So is this going to happen? Is this a forecast?”

“No,” said Jones. “This scenario is based on simply running the model forward. The model is a short-term model. It’s not designed to run this long, as in the real world, trends are always likely to change, whether for better or worse.”

“Okay, but what you’re saying is that if there is no change in current trends, then this is the outcome?” continued the questioner.

Jones nodded with a half-smile. “Yes,” he said quietly.

In other words, simply running the Agent-Based Model forward cannot generate a reliable forecast of the future. For instance, no one anticipated the pace at which solar and wind energy would become cost-competitive with fossil fuels. And the fact that governments and insurers are now beginning to scope such risks, and explore ways of responding, shows how growing awareness of the risks has the potential to trigger change.

Whether that change is big enough to avoid or mitigate the worst is another question. Either way, the model does prove in no uncertain terms that present-day policies are utterly bankrupt.

GRO’s System Dynamics Model takes a different approach, building on the ‘World3’ model developed by scientists at Massachusetts Institute of Technology (MIT), which famously forecast that humankind faced impending “limits to growth” due to environmental and resource constraints.

In popular consciousness, the ‘limits to growth’ forecasts were wrong. But recent studies, including one by the Australian government’s scientific research agency CSIRO, confirm that most of its predictions were startlingly prescient.

Dr. Jones and his team at Anglia Ruskin University have taken this confirmation several steps further, not only by testing the model against the real world, but by recalibrating it internally using new and updated data.

“World3 was a very good, robust system,” he told us. “Some assumptions were incorrect and misparameterised — for instance, life expectancy is smaller than assumed, and industrial and service outputs are larger than assumed. And the model was missing some shock dynamics and feedback loops.”

The same questioner put his hand up and asked, “Does this mean the original model and its predictions are flawed?”

“I would say the model was largely correct,” said Jones. “It was right enough to give a fairly accurate picture of future limits to growth. But there are some incorrect parameters and gaps.”

The System Dynamics Model, Jones explained, is designed to overcome the limitations of World3 by recalibrating the incorrect parameters, adding new parameters where necessary, and inputting fresh data. There are now roughly 2,000 parameters in the model, drawing on a database of key indicators on resources and social measures for 212 countries, from 1995 until today.

Jones’ affirmation of the general accuracy of the limits to growth model was an obvious surprise to some in the room.

The original model forecasted global ecological and economic collapse by around the middle of the 21st century, due to the convergence of climate change, food and water scarcity, and the depletion of cheap fossil fuels — which chimes with both the GRO’s models.

Last year, Dr. Graham Turner updated his CSIRO research at the University of Melbourne, concluding that:

“… the general onset of collapse first appears at about 2015 when per capita industrial output begins a sharp decline. Given this imminent timing, a further issue this paper raises is whether the current economic difficulties of the global financial crisis are potentially related to mechanisms of breakdown in the Limits to Growth BAU [business-as-usual] scenario.”

For the first time, then, we know that in private, British and US government agencies are taking seriously longstanding scientific data showing that a business-as-usual trajectory will likely lead to civilisational collapse within a few decades — generating multiple near-term global disruptions along the way.

The question that remains is: what we are going to do about it?

Editor’s note: The following statement is of course debatable … “The model does not account for the reality that people will react to escalating crises by changing behavior and policies.” People will react, but will they do so fast enough? If the past is the best predictor of the future, then this is highly unlikely?