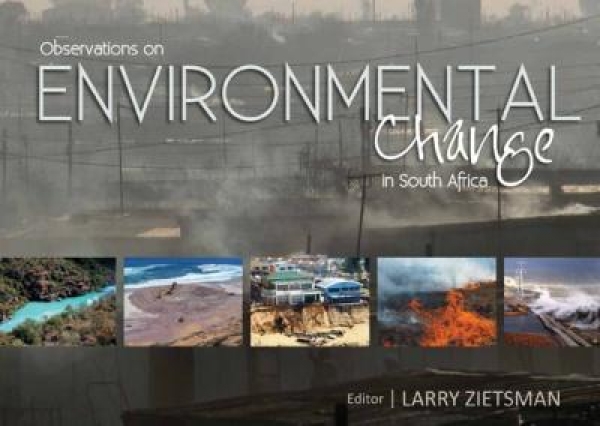 What climate changes have happened so far in SA? Where is all this heading? This is beautifully illustrated in a coffee table type landmark publication recently launched in Stellenbosch:

The book’s idea came from Albert van Jaarsveld, who felt it was important to illustrate in a colourful book for anyone to see the ‘before and after’ of environmental changes in our country.

It also hopes to be a handbook for politicians who don’t always have the time to delve into the intricacies of scientific papers on this important topic.

‘This book shares a holistic look at how the environment is changing and looks at land, oceans and the atmosphere, drawing on the work of SAEON, which currently has 64 long-term environmental observation projects. The book was created to guide South Africa in its efforts to understand, so we can mitigate these changes with wisdom,’ said Johan Pauw, managing director of SEAON during the book launch in Stellenbosch.

‘It draws on environmental conditions with long term scales; the more accurately we can predict, the better.’

Combining knowledge and interpretations serious changes can be understood and predicted.

In the keynote address Dr. Phil Mjawara, Director General of the Department of Science and Technology, said this book forms part of the Department’s Ten-Year Innovation Plan, which includes the Global Change Grand Challenge.

‘Observations on Environmental Change in South Africa provides a comprehensive overview of our current understanding of how global change is affecting the South African environment and, by extension, South African society.’

This book will have a long-lasting effect on science and environmental policy. More than 100 authors from 32 local and eight international organisations joined the South African Environmental Observation Network in bringing the book to life. The project took more than three years to complete and is a good example of what is possible when scientists collaborate.

‘What is remarkable is that all their efforts were voluntary, which has enabled us to make the book available, free of charge, in the interests of the broad dissemination of global change research results.’

Unsustainable land use and policies

Among the issues raised is the projection that South Africa’s population will reach 57 million by 2050, but that sheer population size is not the main driver of environmental change. It is, in fact, unsustainable land-use practices and inadequate management policies that should concern us.

Since up to 90% of rural households use locally harvested natural products for domestic needs, income generation and “safety nets” when times are tough, it is clear that sustainability planning and policies are becoming critically important. The livelihoods of rural households are therefore severely threatened by the uncertainties brought about by changing climate.

Collectively, our human activities can drive changes in the Earth’s systems, and ecosystems, to create new transformed states. The consequences of the rapidly changing conditions are already being felt in Southern Africa. Environmental changes are particularly grave for poverty-ridden sectors of society, which either depend directly on natural resources or have little protection against environmental hazards.

Therefore, as a nation, we are already forced to adapt to environmental change by changing the pattern of our socioeconomic behaviour. Adaptation to environmental change can often take the form of intuitive self-regulation, but more often it is to the advantage of all that the government plays a preventative and regulatory role by creating and enforcing national policy.

To do this, government requires reliable, continuous and relevant information systems, similar to the management information systems that companies use to improve their business processes for increased profitability. The South African Government therefore relies on science for its environmental information needs, and it is in this that the Department of Science and Technology plays a key role.

When there is scientific evidence that the ice on Marion Island has already melted by 60% in the past 50 years, and the surrounding oceans have got warmer by some 1,5 degrees Celsius over the past 40 years, who can still deny that climate change should be taken very seriously by scientists and policy-makers alike?

Although rich in scientific content, Observations on Environmental Change in South Africa is written in an easy-to-read style which makes it accessible to a broad audience, including decision-makers in government, civil society and business. As suggested by my Department, SAEON has also produced a booklet, Combat Change with Change, to translate the scientific meaning of the book into policy language. This booklet is a valuable and rather unique “bridge” to span the omnipresent divide between the natural sciences and public policy.

Observations on Environmental Change in SA will have pride of place on my coffee table and I am going to make sure I get my hands on a few copies to give to visitors to our home or office. This is essential knowledge which every South African should integrate in order to appropriately respond to the biggest challenge of our time.