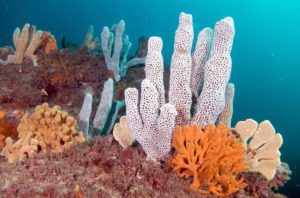 Bacteria from the ocean floor can beat superbugs and cancer. But habitats are at risk from the hunger for marine minerals

When Prof Mat Upton discovered a microbe from a deep-sea sponge was killing pathogenic bugs in his laboratory, he realised it could be a breakthrough in the fight against antibiotic resistant superbugs, which are responsible for thousands of deaths a year in the UK alone.

Further tests last year confirmed that an antibiotic from the sponge bacteria, found living more than 700 metres under the sea at the Rockall trough in the north-east Atlantic, was previously unknown to science, boosting its potential as a life-saving medicine.

But Upton, and other scientists who view the deep ocean and its wealth of unique and undocumented species as a prospecting ground for new medicines, fear such potential will be lost in the rush to exploit the deep sea’s equally rich metal and mineral resources.

“We’re looking at the bioactive potential of marine resources, to see if there are any more medicines or drugs down there before we destroy it for ever,” says Upton, a medical microbiologist at the University of Plymouth. He is among many scientists urging a halt to deep-sea mining, asking for time to weigh up the pros and cons.

“We know sponges are a very good source of bioactive bacteria so I would say they would be a good source of antibiotics and anti-cancer drugs too. In sustainability terms, this could be a better way of exploiting the economic potential of the deep sea.”

Oceanographers using remotely operated vehicles have spotted many new species. Among them have been sea cucumbers with tails allowing them to sail along the ocean floor, and a rare “Dumbo” octopus, found 3,000 metres under the Pacific, off the coast of California.

Upton estimates it could take up to a decade for a newly discovered antibiotic to become a medicine – but the race towards commercial mining in the ocean abyss has already begun.

The deep sea, more than half the world’s surface, contains more nickel, cobalt and rare earth metals than all land reserves combined, according to the US Geological Survey. Mining corporations argue that deep-sea exploration could help diversify the supply of metals, including cobalt for electric car batteries, presently mined in the Democratic Republic of the Congo, where child labour is common. Demand for copper, aluminium, cobalt and other metals, to power technology and smartphones, is soaring.

So far, 29 licences for exploration activities have been granted by the International Seabed Authority (ISA), a UN body made up of 168 countries, to promote and regulate deep-sea mining. No commercial exploitation licenses have been granted yet, but one firm, Global Sea Mineral Resources, has said it needs regulations in place by next year to start mining in 2026.