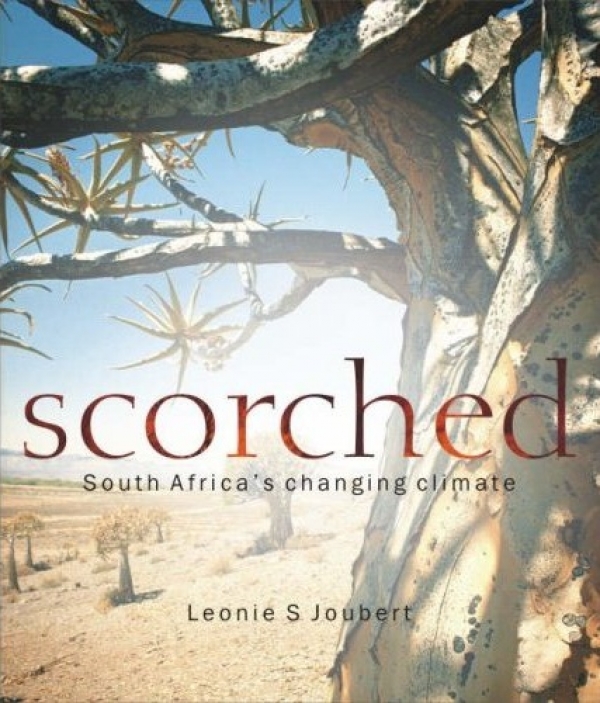 Scorched is a vivid journey through southern Africa’s mesmerising landscapes as climate change sets in. It wanders through the KwaZulu-Natal Midlands to capture the last faltering calls of a rain frog that was named after the hobbit Bilbo Baggins.

Author Leonie Joubert pauses for thought following an elephant stampede to consider how savannahs might shift in an altered climate. She trails the wading birds of the West Coast into the high Arctic tundra for their annual breeding season before returning to a Cape which is crisping over as drought continues to grip the province. Another world exists somewhere beyond the global politicking of super powers and petrostates.

This is the place where a solitary bee continues to pollinate the pale, demure flower of an orchid near Darling, or where the limey coral skeleton hosts its colourful algae on a Sodwana reef.

These plants and animals – many of which are unique to the region – continue to do what their ancestors have done for millions of years. Yet the world is shifting its shape around them. In places it is warming and drying, elsewhere the rains come in greater deluges. Some are abandoned by the other plants and animals with which they have cohabited, as species retreat before the onslaught of rising greenhouse gases and altered weather patterns.

Scorched marvels at the world in which we live: the improbable balance of the air round us and the way it banks away the Sun’s energy to keep us warm and thriving, the way life has evolved in this planetary incubator and how one species has risen up to become a potent geophysical force with the ability to shift a system which has evolved over 4 600 million years. It gives powerful local colour to a global problem. It ponders the morality of the changes humankind has wrought, and the future of life as we know it.