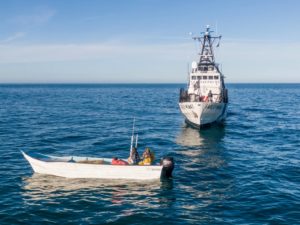 At about 07:00 on the morning of Thursday 31 December, a group of assailants in 5 – 7 fishing boats launched a violent attack on Sea Shepherd vessels Farley Mowat and Sharpie inside the Zero Tolerance Area of Mexico’s federally-protected Vaquita Refuge.

The incident began as the crew of the Farley Mowat undertook efforts to retrieve a gillnet from the protected region, home to the critically endangered vaquita porpoise. Gillnet fishing is banned in the region, and Sea Shepherd is working with Mexican authorities to deter poaching and remove illegal fishing gear from the area. As the conservation vessel attempted to remove the net from the refuge, several boats aggressively approached the ship, launching lead weights and Molotov cocktails at the crew and military officials on board.

Following routine anti-piracy procedures, the Farley Mowat undertook defensive maneuvering to avoid the attacks. As the vessel attempted to leave the scene, one of the pangas aggressively swerved in front of the Farley Mowat, crashing directly into the hull of the former U.S. Coast Guard Cutter. CCTV footage recorded on the bridge of the Farley Mowat captured images of the incident.

The boat split into two pieces, expelling its passengers into the sea. Crew and military personnel on board Sea Shepherd’s second vessel in the area, Sharpie, responded immediately, recovered the two men, who had been picked up by one of the other boats involved in the attack, and brought them on board. Sea Shepherd’s Medical Officer, Corrine Perron, provided emergency first aid.

One assailant was not breathing when brought on board the conservation vessel. Sea Shepherd’s Medical Officer used the ship’s AED and administered immediate CPR and emergency oxygen. The second assailant has suspected broken ribs. Two medics from the Mexican Navy arrived at the scene and provided additional emergency care to the men. As the medics continued to tend to the injured parties, two assailants illegally boarded the Sharpie, threatened its crew and the Mexican officials on board, and smashed the camera being used to document the emergency first response. Assailants in nearby boats threw projectiles and fuel at Sharpie, catching its bow on fire. Sharpie crew and military officials successfully put out the fire and removed the two men who had illegally boarded the ship. Sea Shepherd rushed the injured men to two nearby naval vessels, a defender and an interceptor, for follow-up medical treatment. They have since been airlifted to the hospital.

As Sharpie departed from the scene, the boats continued to attack, launching additional Molotov cocktails at the vessel, setting the recovered fishing gear collected on the vessel’s aft-deck on fire. The crew and military personnel on board were able to extinguish the fire. On shore, assailants set fire to Sea Shepherd’s truck.

The Mexican Navy is investigating the incident.

This attack is the latest in a series of increasingly violent assaults launched against Sea Shepherd’s ships over the past month. Assailants have hurled Molotov cocktails, knives, hammers, flares, bottles of fuel, and other deadly projectiles at the vessels, crew, and military personnel on board. No serious injuries have occurred prior to today’s incident.

The conservation organization’s vessels have come under attack in the past while defending the habitat of the vaquita. In March 2020, a group of boats swarmed Farley Mowat and Sharpie, launching rocks, lead weights, and other projectiles at the ships. One month prior, assailants opened fire at Sea Shepherd’s vessels. In 2019, Farley Mowat was illegally boarded and its hull set on fire.

The Vaquita Refuge is a UNESCO-recognized region in the Upper Gulf of California that is home to the world’s most endangered marine mammal – the vaquita. The endemic porpoise has experienced a rapid population decline over recent years due to entanglement in gillnets. There are fewer than 20 vaquitas left alive. Scientists believe the remaining vaquita population is concentrated in a high-priority zone of the Vaquita Refuge known as the Zero Tolerance Area.

Working closely with Mexican authorities, Sea Shepherd monitors the Vaquita Refuge to deter poaching and remove the illegal nets that threaten the survival of the species. This partnership has resulted in the retrieval of over 1,000 gillnets to-date.