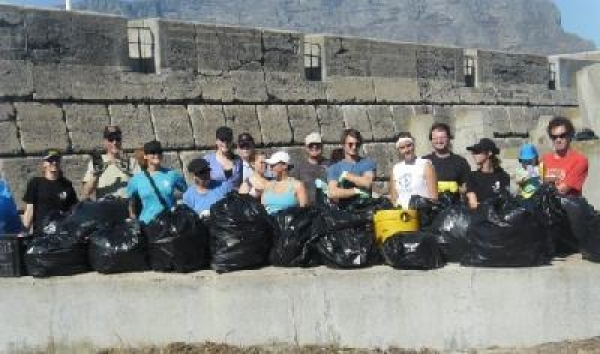 Sea Shepherd Conservation Society, a direct action organization, gathered on the 9th of April at 9am on the East Pier of the V&A Waterfront (Breakwater Blvd) for a beach clean-up and worked their way towards Granger Bay and Greenpoint.

The sun was blazing hot, but the volunteers were determined to clean up the mess which filled more than 60 plastic waste bags. Discarded packets, plastic bottles, rope, tyres, broken glass, clothing and cigarette butts were found in their masses. Worst of all were the cigarette butts!  There were so many that they decided to leave them on the beach, or else they would have been there for a few days.

Did you know that cigarette butts can’t be  composted or recycled in any other way? They contain a vast array of very toxic chemicals, which destroy the environment. In a number of countries, like Italy, they now have legislation in place which bans the dumping of cigarette butts. They now have to be discarded of with toxic waste, as that is what they are.

“Our final tally was 80 bags of trash collected. 70 in the morning and another ten after lunch…this was not more than 100 meters from the Dept of Environmental Affairs and Tourism. Makes you wonder. Sadly this was just the tip of the iceberg. The place is still a mess and I can only imagine what the rest of the beaches look like. It is plainly evident that the city council is doing very little in terms of cleaning up. We will definitely be doing this type of thing more often and would like to involve schools and other businesses. There is clearly a need for it. If anyone would like to join us on such or would like to help plan one, they are welcome to contact me.” Pat Dickens, National Coordinator, Sea Shepherd Conservation Society.

When are South Africans going to get the message?

‘We plan to restore the beach front to its rightful place as a premier tourist destination, rather than accept it as the illegal dump it has become’ Pat Dickens, National Coordinator of Sea Shepherd South Africa said. After the clean-up the group dropped the bags in front of the Environment and Tourism Centre to encourage the government to take action.

Why is a beach clean-up in Cape Town necessary?

Hundreds of thousands of sea birds become entangled in marine debris. They lose their legs, they cannot swim or feed. They either starve to death or drown. Entanglement affects all types of creatures including whales, sharks, dolphins, seals and turtles.

Marine animals also mistake trash for food and many die from consuming plastic bags, cigarette butts and debris from fireworks.

‘Beaches are an ideal tourist attraction. The V&A Waterfront in Cape Town (for example) is known as a premier tourist destination. By maintaining the highest standards, we can ensure a continuous stream of tourism. The revenue generated from the support of tourists is essential to our community.’

For many of us, a day at the beach is where we go to relax after a hard weeks work. It is a time of recreation and to be with our children and families. We certainly don’t want this spoiled by sitting in a pile of filth or worse yet, injuring ourselves by stepping on shards of broken glass.

What exactly is marine debris?

Marine debris is trash or other solid material, which enters oceans and often washes up on beaches. Research has indicated that more than 80% of marine debris comes from land based pollution. When it rains, trash left on the sidewalks and streets is washed into storm drains, which is then carried to the nearest waterway, and eventually flows into the ocean. 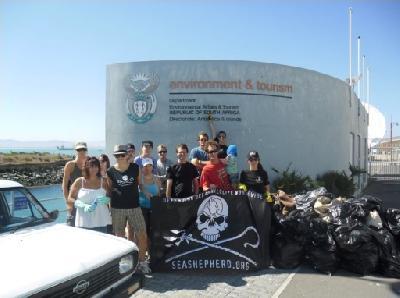 ‘Often beach goers themselves are responsible and leave their litter lying around where it blows around and ends up in the sea. Ocean users, such as recreational and commercial fishermen, may lose or discard fishing materials and other debris overboard. Sometimes this is unintentional, other times deliberate.’

How can YOU help eliminate marine debris?

Marine debris is a symptom of a much larger water pollution problem caused by our everyday consumer lifestyle. Recognizing your role as part of the problem is the first step towards finding a solution.

You can be part of the solution by making some basic lifestyle changes: