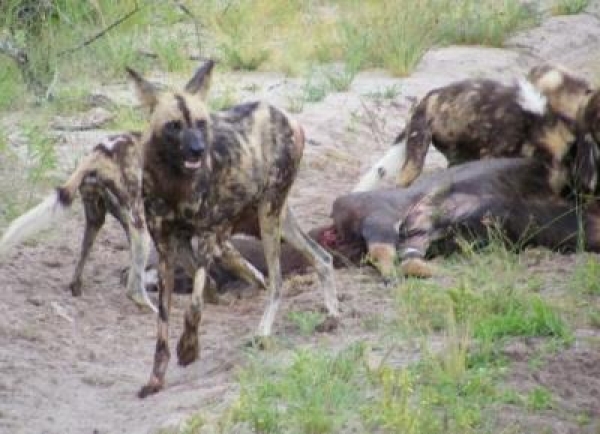 Several of the 14 Wild Dogs were released into Tembe Elephant Park in KZN. Image: EWT

A pack of 14 Endangered African Wild Dogs has been reintroduced into the Tembe Elephant Park, following extensive community liaison and preparation work over the past year.

It was an emotional occasion, as many people present have been involved in this project from the very beginning and are deeply aware of the extreme importance of this release.

‘The release of this Wild Dog pack into the Tembe Elephant Park is vital to the survival of South Africa’s managed Wild Dog metapopulation,’ says the Endangered Wildlife Trust’s Kelly Marnewick.

‘It’s incredible to finally see them stepping into the wild and we are all holding thumbs that they will do well.’

The formal Wild Dog metapopulation programme was initiated in 1998 to expand the species’ range throughout South Africa. Tembe will be the 12th reserve to receive Wild Dogs as part of the programme.

The Wild Dog Metapopulation Program is coordinated by the Wild Dog Advisory Group (WAG). The Endangered Wildlife Trust (EWT) has held the WAG chair since its inception and has implemented many projects under the WAG umbrella, including projects in the Venetia Limpopo Nature Reserve and Marakele National Park (both in Limpopo Province), and the Northern Tuli Game Reserve in Botswana. Much of the support for these activities in KZN has come from Land Rover South Africa and the Green Trust, while Wildlife Act, the Wildlands Conservation Trust, Ezemvelo KZN Wildlife ( EKZNW), Tembe Tribal Authority, Dr M. Toft and Tembe Elephant Park Lodge have been key partners. 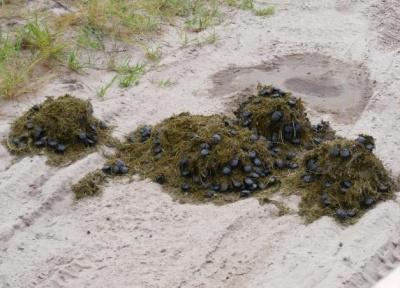 Wild Dogs Lycaon pictus are South Africa’s rarest carnivore and were extirpated from KZN in the 1930s. There are less than 400 Wild Dogs remaining in South Africa, of which approximately 130 are in the Kruger National Park and 160 in northern KZN (approximately 110 of which are in Hluhluwe-iMfolozi Park).

Reintroduction initiatives for Wild Dogs into KZN began in 1980 and there are currently four reserves in KZN with resident Wild Dogs, namely Hluhluwe-iMfolozi Park, Mkhuze Game Reserve, Thanda Game Reserve and Hlambanyathi Game Reserve. In 2006 the EWT started a project to expand the range for Wild Dogs in KZN, in partnership with EKZNW and the Smithsonian Institution. EKZNW has been instrumental in expanding Wild Dog range in the province under this project.

In December 2009 four male Wild Dogs from the then De Wildt Cheetah and Wildlife Trust were relocated to Tembe Elephant Park and accommodated in a boma, with the intention of later reintroducing them into the reserve.  In February 2010 three females from Hluhluwe-iMfolozi Park joined them. The pack produced seven pups while communities in the area were prepared for their release. 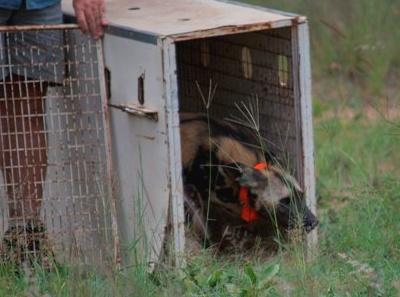 One of two female wild dogs collected by the EWT earlier this month from the De Wildt Shingwedzi Wildlife Ranch, where they were temporary kept after being captured on an intolerant farmer’s property. The EWT re-released them into the Waterberg Biosphere, which is part of the range of the dogs. They were collared with very visible ornage collars for easy identification and released back into the Waterberg Biosphere, as the population of wild dogs in the Waterberg is of special conservation importance. The EWT wil continue monitoring these wild dogs as part of their Waterberg Predator Project. Photo added by Deon Cilliers to the Endangered Wildlife Trust’s Facebook group.

The potential for conflict between reintroduced Wild Dogs and neighbouring landowners is high. Wild Dogs may attack livestock, while they are also often confused with domestic dogs, which can do a great deal of livestock damage. As such, Wildlife ACT, with support from the Endangered Wildlife Trust and Wildlands Conservation Trust, began to actively engage community stakeholders regarding the project in March 2010. This was the first time that a KwaZulu-Natal tribal authority had been actively engaged in the decision making and preparation process for the reintroduction of Wild Dogs and the result was that the Tembe Tribal Authority, the Tembe Local Board and the local municipality gave their support for the initiative.

African Wild Dogs once occurred throughout sub-Saharan Africa but now occupy only a fraction of that range. Habitat fragmentation and isolation, exacerbated by human persecution, are the main factors contributing to this decline. There are currently about 5 500’6 000 Wild Dogs left in the wild globally and the species is listed as Endangered by the International Union for the Conservation of Nature (IUCN). Only a handful of countries contain viable Wild Dog populations, with the largest populations occurring in northern Botswana, Tanzania and northern Mozambique.

Wild Dogs are particularly challenging to conserve because they range widely and occur at low densities. As such even the largest protected areas are able to support only small populations. The conservation and management of small, fragmented populations has therefore become an unavoidable necessity.

Wildlife ACT will be monitoring the Tembe pack, while the EWT will remain involved in its role as coordinator of the KZN Wild Dog Management Group. The group aims to promote the national Wild Dog Range Management Project and establish safe corridors between reserves for natural dispersals of the species.