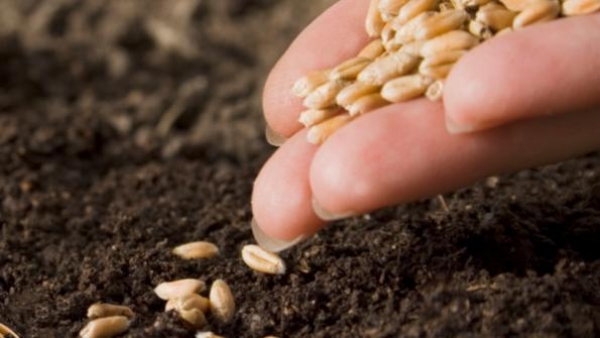 A single food seed can be as tiny as a grain of sand. Yet many say the fate of the entire organic industry rests upon our efforts to protect the integrity of these small, but vital agricultural inputs.

“Seed is the first resource in our food production chain, so its integrity is vital to the success of organic farmers. Yet little has been done to address the issue of genetic contamination,” says Kristina Hubbard, director of advocacy for the Organic Seed Alliance. “I don’t think seed is getting enough attention.”

As the natural foods industry gears up for an unprecedented assault on genetically modified organisms (GMOs), much emphasis has been placed on convincing government to label foods containing GMOs and on swaying grocers and manufacturers to rid them from the retail shelf. But Hubbard and others say those actions will mean little if farmers can’t find clean, GMO-free seed to plant in the first place.

Most of the US’s corn is already GM

Thanks to floating pollen, stowaway seeds on delivery trucks, and the fact that even organic farmers must turn to conventional seed due to a shortage of organic varieties, seed experts say the vast majority of corn growing in the United States already contains some degree of genetically modified (GM) material. Soy, canola and alfalfa are also high on the list for possible contamination.

Even non-GM seed breeders – forced to buy their genetic material from biotech companies in an age of increased seed company consolidation – can’t guarantee that their seeds are genetically pure anymore, says OSA founder and consultant Matt Dillon. Furthermore, because funding for university research into natural, non-GM alternatives is a fraction of what it once was, Dillon says that it’s becoming increasingly difficult to find innovative solutions to protect the non-GM seed that still exists.

Meanwhile, organic consumers are growing outraged that even when they buy “organic” or “non-GMO” products, they may still be eating genetically altered food.

So what’s the answer?

“We have to create our own seed system,” says Dillon, who will join stakeholders from industry and nonprofits to roll out a host of seed-preservation initiatives in the coming months. “If we just say ‘stop GMOs’ and we don’t protect and develop the seeds we really need, we haven’t succeeded at anything.”

How did GMOs alter the seed landscape?

Dillon points to the 1980 Diamond v. Chakrabarty Supreme Court ruling as the beginning of the end of seed purity. In that case, the court ruled that “a live, human-made micro-organism is patentable,” and by the mid-1990s, it was evident that this applied to plants too. Soon a handful of agrichemical companies including DuPont, Syngenta and Monsanto—which previously had showed no interest in seeds—owned more than 65 percent of the world’s proprietary seed.

“It was kind of like a land grab, only it was genes they were interested in,” says Dillon. Today, according to the Independent Professional Seed Association, only 100 independent seed companies remain (compared to 300, 13 years ago), serving an organic industry that has grown exponentially. The result: Many organic farmers are forced to use conventional seed that originates from the very companies that spawned the GM revolution. In fact, according to the OSA’s 2011 State of Organic Seed Report, just 20 percent of organic farmers surveyed used strictly organic seed over the past three years.

Although organic seed is a good start, there’s no guarantee that it’s GMO-free either.

Even organic seed companies trying in good faith to develop non-GMO varieties are often forced to turn to biotech, rather than the universities they once relied on, for their genetic material. Over the last 16 years, just 9.4 million federal dollars have been spent on sustainable plant breeding and education at land grant universities, according to Dillon.

“If I am an organic seed company and I lease those lines from one of the big GM companies, that parent line is very likely contaminated to some degree already,” Dillon explains. “From the start, at the foundation level, the seed may already be contaminated.”

In recent years, dozens of highly publicized cases have spotlighted the problem of contamination.

For instance, in 2007, Straus Family Creamery made Time magazine under a damning headline that read, “When Organic Isn’t Really Organic,” after Albert Straus discovered that 6 percent of the organic corn feed he was dishing up for his cattle was contaminated with GMOs.

That same year, Nevada Soy Products, a producer of organic soybean oil and meal, lost $100,000 in revenues and had to shut down for a month after discovering organic soybeans it had received were as much as 20 percent contaminated. Fedco Seeds has dropped corn seed offerings twice after realizing they contained GMOs.

The frightening thing about contamination is that it can occur even when growers do everything they can to prevent it. For example, Wisconsin dairy and soy farmer Keith Wilson appeared to do everything right at his farm: He used only organic seed from a trusted source, and he created crop buffer zones to minimize pollen drift. Still in June, Wilson ended up taking a $4,500 hit after one of his loads of soybeans tested positive for genetically engineered material.

“This thing is just out of hand,” he says. “We are known and trusted here as one of the top organic producers. It hit me hard.”

Organic Valley Co-Operative CEO George Siemon says that, although he has no hard numbers, he estimates that roughly 80 percent to 90 percent of the crop contamination his farmers see is not from pollen-drift (as many assume), but rather from the seed the farmers plant themselves.

“It is becoming a bigger and bigger problem,” Siemon says. To address it, Organic Valley will roll out an initiative next spring that will ultimately require all of its 1,600 farms in 33 states to use organic seed and test it for GMO contamination. “We need to provide an economic incentive for clean seed,” Siemon adds. “If we don’t start working on it, we will lose the opportunity forever.”

Other companies are stepping up as well. The Clif Bar Family Foundation, through its Seed Matters program, has donated $1 million to the Organic Farming Research Foundation, the OSA and the Center for Food Safety to promote clean seed preservation.

The OSA is already at work on the problem. The nonprofit has launched a “seeds and breeds initiative” aiming at inserting language into the next Farm Bill to increase funding for public, sustainable plant breeding initiatives. The OSA is also putting pressure on the U.S. Department of Justice to take a closer look at what it sees as anti-competitive conduct in the seed industry. In addition, it launched a new working group this year focused on helping farmers earn compensation when their crops are contaminated.

“We will have three or four more major initiatives coming out this fall,” says Dillon, who plans to make an announcement on those new initiatives at Natural Products Expo East in Baltimore, Md., in September.

In the meantime, Dillon says he’ll be busy rallying support for an issue that he believes has been under the radar too long.