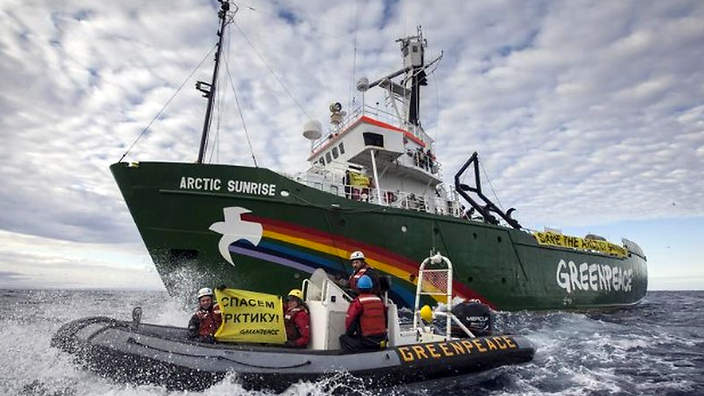 A case was launched yesterday at the European Court of Human Rights on behalf of the Arctic 30, who spent two months in Russian jail for a peaceful protest to save the Arctic.

The 30 individuals are requesting “just compensation” from the Russian Federation, and importantly, a statement from the independent Court saying that their apprehension in international waters by Russian agents and subsequent detention were unlawful.

The European Court has the power to hold Russia to account for the months of uncertainty the Arctic 30 faced in Russia. While held in detention centres they lived with the fear that they could spend years locked up for a crime they did not commit.

The European Court has jurisdiction over matters involving alleged human rights violations committed by Russia. In many cases Russia has been found liable for such violations and ordered to compensate victims. Ultimately, this case aims to ensure Russia lives up to its human rights commitments.

The Arctic 30 were abducted and forcibly detained by armed Russian agents following a peaceful protest against oil drilling in pristine Arctic waters. During the protest, two unmarked inflatables appeared from the Russian Federal Security Service vessel Ladoga, each manned with at least three Russian State agents in balaclavas with weapons. The Russian agents threw ropes at the propellers of the Greenpeace inflatables. The lines hit some of the activists. The agents proceeded to threaten the activists with guns and knives. Several of the Greenpeace inflatables were punctured with knives.

A chilling effect on future protests

Once the protest ended, the activists, with the exception of the two brave climbers who were apprehended by Russian agents near the platform, returned to the Greenpeace ship, the Arctic Sunrise. The Russian agents’ violent response breached their rights to freedom of expression and has a chilling effect on future peaceful protests aimed at protecting the Arctic.

While the Greenpeace ship was being towed to a Russian port by the Russian Authorities, the Arctic 30 were detained onboard without charge for more than five days. The Arctic 30 were threatened with weapons if they did not follow the orders of the Russian agents. They were searched and locked in their cabins or other premises on the Arctic Sunrise. All communication devices were taken from them. No movements were possible without the authorisation of the Russian agents.

The authorities provided unfounded legal grounds for the detention only after arriving at a Murmansk port. All 30 were charged with piracy.

No basis for hooliganism charge

Their ordeal became even worse. The activists were locked up in some of Russia’s most notorious detention facilities for more than two months. This is despite the fact that the head of the Investigative Committee of the Russian Federation issued a ruling halfway through their time behind bars that the ground for detention, piracy, was determined to be an improper charge, and a decision was made to reclassify the crime to hooliganism.

The activists remained behind bars for another month, until finally being released on bail. On Christmas Day 2013, the Investigative Committee officials informed the Arctic 30 that their hooliganism charges were dropped as a result of a recently adopted amnesty decree. They were finally free to return home to their families.

Russia’s unlawful actions forever changed their lives. During the protest their safety was put at risk. While on board the Arctic Sunrise as it was being towed to a Russian port they were detained without legal grounds and no opportunity to go before a judge. In detention they faced spending a decade or more behind bars for a crime they didn’t commit – a crime that sadly Russian authorities even admitted they couldn’t possibly have committed.

The Arctic 30 are not criminals. They are peaceful protesters, journalists and environmental human rights defenders. As the saying ‘the millstones of Justice turn exceedingly slow, but grind exceedingly fine’ goes, we anticipate that ultimately the European Court will order Russia to compensate the 30 and declare that their rights to freedom of expression and liberty were violated by Russia.

Sergey Golubok is a legal representative for the Arctic 30 before the European Court, and Kristin Casper is Legal Counsel for campaigns & actions at Greenpeace International.