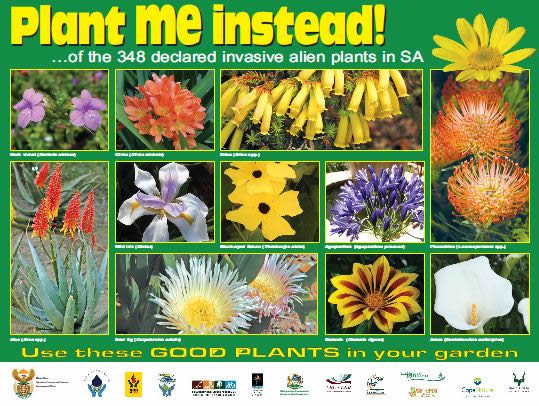 Image: Life Is A Garden

On 1 August 2014, the Minister of Environmental Affairs published the Alien and Invasive Species Regulations (“the Regulations”) which came into effect on the 1st of October 2014 in a bid to curb the negative effects of IAPs.

The Regulations call on land owners and sellers of land alike to assist the Department of Environmental Affairs to conserve our indigenous fauna and flora and to foster sustainable use of our land. Non-adherence to the Regulations by a land owner or a seller of land can result in a criminal offence punishable by a fine of up to R5 million (R10 million in case of a second offence) and / or a period of imprisonment of up to 10 years.

Know your invasives – eradicate or get a permit

The Regulations published identified a total of 559 alien species as invasive in four different categories, and a further 560 species listed as prohibited that may not be introduced into the country.

Category 1a and 1b listed invasive species must be controlled and eradicated. Category 2 plants may only be grown if a permit is obtained and the property owner ensures that the invasive species do not spread beyond his or her property. The growing of Category 3 species is subject to various exemptions and prohibitions. It is interesting to note that some invasive plants are categorised differently in different provinces. For example: the Spanish Broom plant is categorised as a category 1b (harmful) invasive plant in Eastern Cape and Western Cape, but it is a category 3 (less harmful) invasive plant in the other seven provinces.

Other invasive plants are categorised differently depending on whether they appear in urban or rural areas. Jacarandas serve as example: the species are classified as a category 1b invasive species in rural areas within KZN as well as in three other provinces, but in the urban areas of these provinces it is exempted from the regulations. Jacarandas situated in the urban areas of Pretoria are thus safe for now.

Help is on the way

Depending on the identified IAP and its classification in terms of the Regulations a land owner must allow an authorised official from the Department of Environmental Affairs to enter onto the land to monitor, assist or implement the combating, control or eradication of the species in accordance with the Regulations.

In terms of Regulation 29, if a permit holder sells property on which a listed IAP is under the permit holder’s control, the new owner of such property must apply for a permit in terms of the Act. The seller of any immovable property must also, prior to the conclusion of the relevant sale agreement, notify the purchaser of that property in writing of the presence of listed IAPs on the property.

In practice, an estate agent can add value by guiding a seller to adhere to the letter of Regulation 29. An estate agent should ask the sellers to declare in writing whether they are aware of any IAPs on their properties or if they hold permits for species that require permits to be held on the property. If an enquiry of an estate agent establishes that IAPs are to be found on the land for sale or that the seller holds a permit, then a copy of this confirmation must be given to a prospective purchaser and the purchaser’s offer should include an acknowledgement by the purchaser that he has been advised of the invasive species on the property.

Property sales agreements dated 1 October 2014 and onwards, should also incorporate a clause in terms of which the purchaser acknowledges that he has acquainted himself with the extent and the nature of the property he is buying and that he accepts the property as such, including the vegetation on the property.

The declaration by the seller resulting from an inquiry of an Estate Agent, and the subsequent incorporation of the facts on the ground pertaining to the fauna and flora into the deed of sale, could well assist in adhering to Regulation 29 and so avoid the heavy punishments imposed by the Regulations.

So if you are buying or selling property that could contain IAPs, consult with your attorney as to what steps you should take to ensure that you comply with the regulations.

A list of Alien Invasive Species can be found here.