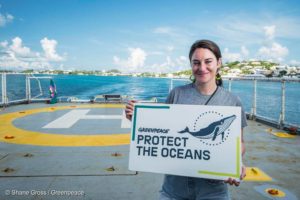 Greenpeace has launched an expedition to the Sargasso Sea, a unique region in the North Atlantic Ocean, to study the impact of plastics and microplastics on marine life, and to document the importance of this unique ecosystem for protection under a new Global Ocean Treaty that is being negotiated at the UN. The Greenpeace ship Esperanza departs from Penno’s Wharf in Bermuda and will sail upon the Sargasso Sea over the course of nearly three weeks.

“The world’s only borderless sea, the Sargasso has been a source of mystery and myth, from the lost kingdom of Atlantis to the Bermuda Triangle,” says Greenpeace Oceans Director, John Hocevar.

“Today, the Sargasso Sea continues to challenge us with questions that could affect us all. Is our reliance on fossil fuels and throwaway plastics transforming this vital sea turtle nursery area into a death trap? We hope our findings from this research expedition will shed light on the health of this unique ecosystem,” Hocevar adds.

The voyage to the Sargasso is part of Greenpeace’s ambitious Pole to Pole expedition aimed at highlighting the threats facing international waters – from the Arctic to the Antarctic – and the urgent need for their protection under a new Global Ocean Treaty. 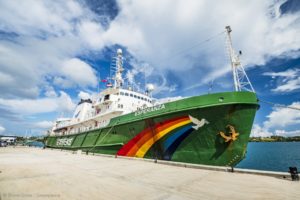 “We have six months to build support for a strong Global Ocean Treaty. This is a once in a lifetime opportunity to scale up ocean sanctuaries, the best tool we have to protect our oceans,” Hocevar stresses.

Onboard the Esperanza are Greenpeace scientists and partner researchers at the University of Florida who will be analyzing the critical importance of the Sargasso’s iconic drifting Sargassum (seaweed) habitat that acts as a nursery for juvenile sea turtles.

PhD Candidate, Alexandra Guilick from the Archie Carr Center for Sea Turtle Research at the University of Florida, explains, “we will be quantifying thermal habitat for sea turtles in Sargassum mats in the Sargasso Sea. Sargassum mats are critical habitat for a number of species and provide refuge, forage, and early developmental habitat for juvenile sea turtles. More recently, it has been hypothesized that Sargassum may provide a heat advantage to developing sea turtles, providing a warmer environment than the neighboring open water, thus potentially increasing sea turtle growth rates.”

Fellow PhD Candidate, Nerine Constant adds, “creating detailed thermal profiles of Sargassum mats will improve our understanding of the importance of this habitat, and in light of climate change, may help predict potential impacts of increasing sea surface temperature on the suitability of this habitat for sea turtles and other species. We hope this study and our collaboration with Greenpeace will help raise awareness of the importance of protecting the Sargasso Sea from threats like climate change and plastic pollution.”

Also onboard is Emmy-award nominee and environmental activist, Shailene Woodley who announced the expedition on Jimmy Kimmel Live!, as the newest Greenpeace Oceans Ambassador.

Kimmel asked the ‘Big Little Lies’ star her plans for the summer, to which she replied: “I’m going to the ocean! I’m doing something with Greenpeace in a couple of weeks, which I feel very grateful for. We’re going to the Sargasso Sea and we’re going to study and research microplastics and micropollution.”