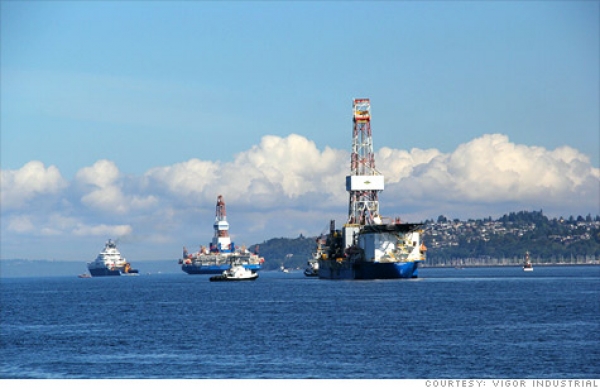 While Shell previously asserted that it would be able to recover 90% of any oil spilled as a result of its planned Arctic oil drilling, they are now claiming that it is impossible to make such claims.

That being said, the head of the Coast Guard has testified before Congress that there’s effectively “no way of actually cleaning up an oil spill in icy water“.

Shell’s obfuscation of their ability to clean up after an Arctic oil spill aside, a coalition of environmental groups has just filed a lawsuit challenging the Bureau of Safety and Environment Enforcement’s drilling approval.

“We have been forced to court to make sure the Arctic Ocean is protected and Shell is prepared, as mandated by law. BSEE rubber-stamped plans that rely on unbelievable assumptions, include equipment that has never been tested in Arctic conditions, and ignore the very real possibility that a spill could continue through the winter. The agency has not met minimum legal standards to be sure that Shell’s plans could be effective and that Shell has sufficient boats, resources, and spill responders to remove a ‘worst-case’ oil spill in the Arctic Ocean to the ‘maximum extent practicable.’ Even after Deepwater Horizon, Interior Secretary Salazar brushed aside concerns about Shell’s spill response capabilities, stating recently that ‘there is not going to be an oil spill’.

The American people deserve more. There have been no tests of spill response equipment in US Arctic waters since 2000 and those equipment tests were ‘a failure.’…Even in relatively favorable conditions, less than 10 percent of spilled oil was recovered after the Deepwater Horizon and Exxon Valdez spills. In the Arctic, sea ice, harsh weather, high seas, darkness and wind may render even that level of cleanup impossible.”