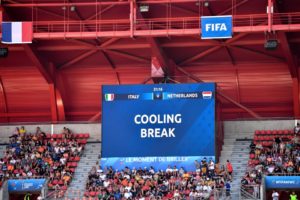 Cooling break during the quarter-final between in ITALY and NETHERLANDS the 2019 women’s football World cup at Stade du Hainaut, a stadium in France. Image: Julien Mattia / NurPhoto via Getty Images.

Living in a warming world means experiencing a litany of unexpected events.

From an increase in the population of iguanas in Florida and super nests of wasps in Alabama, to world-class soccer stars competing in record-breaking heat in France and torrential rainfall in India, this week has seen a slew of unprecedented and unexpected climate impacts.

Last month was the hottest June ever experienced in Europe. In France, where athletes are currently competing in the 2019 Women’s World Cup, the country saw its highest temperature since records began — a small town in the southern part of the country, Gallargues-le-Monteuex, reached 45.9 degrees Celsius (114.6 degrees Fahrenheit) on June 28. That’s more than 1.5 degrees Celsius above the previous record set in 2003.

New analysis out this week by scientists trying to decipher the degree to which climate change played a role in these soaring temperatures revealed that global warming may indeed have made the heat wave “at least five times” more likely.

Areas in Switzerland, Germany, the Czech Republic and Spain also experienced record-breaking heat, and Austria logged its warmest June on record, which was “in large part due to the heat wave,” researchers said.

As a result, there were wildfires in Spain and 4,000 schools closed early in France. And in Toulouse, France, a conference on extreme weather and climate change was also disrupted.