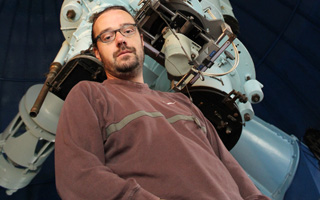 University of the Western Cape (UWC) researcher, Dr Mattia Vaccari recently co-authored a Nature paper that could help explain the mystery of large elliptical galaxies in an early Universe.

Vaccari is an SKA SA postdoctoral fellow in UWC’s astrophysics group. For this prestigious publication, he was part of a team of scientists that observed what seems to be the collision and merger of two galaxies, some 11 billion years ago.

Vaccari helped tweak the sensors of the Herschel Space Observatory (HSO) to catch a glimpse of the event.

The curious thing is that the eventual product of the collision, an elliptical galaxy known as HXMM01, was thought to be rare in the Universe’s youth. According to a statement by UWC, the temperature of the galaxy’s dust is also quite high, about -218 °C, which means it produced about 2 000 stars a year – more than a thousand times the rate of star production in the Milky Way.

HSO is the largest infrared telescope ever launched into earth orbit, but after three-and-a-half years of exploration, it has finally run out of coolant. This means further studies into the evolution of HXMM01 will have to be done with ground-based telescopes.

Vaccari says the MeerKAT radio telescope, which is not only an SKA pathfinder, but also a fully South African project, will take the team’s research further.

“Both MeerKAT radio observations and HSO far-Infrared observations probe star formation processes that are not observable in the optical part of the electromagnetic spectrum, due to the presence of dust in the cores of star-forming galaxies,” he says. “MeerKAT and the SKA will allow us to observe fainter sources in more detail, and in a way that may not be possible from space for quite a while, due to the extremely high costs of space satellite missions.”

The Nature article, ‘The rapid assembly of an elliptical galaxy of 400 billion solar masses at a redshift of 2.3’, is available at www.nature.com and via open access.