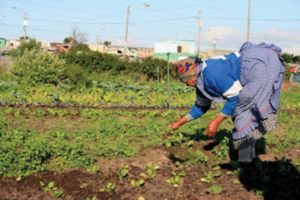 An urban micro-farming project with 3000 home and community gardens on the Cape Flats offers a food security model for the country.

We have been conditioned to believe that farming must be intensive and make large profits, that big is best and small is a waste of time. But an agricultural NGO working for 25 years on the Cape Flats has shown that good food and money can be made by uneducated people from tiny urban gardens.

From seed to table.

The organisation, Abalimi Bezekhaya (people who farm around the house), has a simple structure. Two non-profit nurseries and training centres form the base, one in Khayelitsha and the other in Nyanga. Here people buy seeds, seedlings and manure and get advice and training which they use to start their own gardens.

People start at a survival level growing for themselves, then progress to subsistence level with a small surplus to give to neighbours, and then to livelihood level where 50% is for their own consumption and 50% is sold. Abalimi tries to stabilise its farmers at this level.

According to Rob Small, resource mobilisation manager of Abalimi, ‘Funders don’t understand why projects stop; they think that poor people must farm with nothing, that organics don’t work, that micro-farming isn’t viable, and that black people can’t farm. These are myths. The truth is that you have to give basic support forever if you want to have food.’

‘Consider the massive industrial farming subsidies given in the EU and USA, small farm support cost one farmer with training, supplies, basic business skills, and support. That person goes on to feed a family and generate an income. It is a powerful model.’

We visited a community garden, Masicendane (help each other) in Gugulethu run by five women farmers, all grandmothers.

Masicendane is surrounded by informal housing. An electricity pylon stands in the middle, but according to Rob it is safe and hasn’t affected the growth or size of the produce. Water is from a borehole which has been tested for purity. Interestingly there is very little theft; vegetables are not a big steal.

Mama Gladys, 86, walked up and down the rows loading the harvest into a pull-barrow. Her sunhat is made from woven plastic bags.

The women produce vegetables for their homes and to sell, and earn up to R1500 each a month after costs.

I asked Rob about organic certification. Standing next to a luscious compost heap he explained:

‘Getting certified is too much admin; it’s a lengthy process and needs to be done annually. We provide our own guarantee and certification. At the end of the day it’s about trust in your own farmers.’

He described how the grandmothers’ garden could be farmed far more intensively and generate R30 000 per month.

‘However, if you push nature to the edge there is a comeback; and when farming moves beyond livelihood level to commercial level, people no longer share. It becomes about getting rich.’

To help micro-farmers sell their produce, Abalimi started a marketing programme called Harvest of Hope last year. This ensures farmers an income via a box scheme selling organic vegetables to people in the suburbs.

On Tuesday mornings farmers harvest their crops; Abalimi takes the produce to the packshed where it is cleaned, packaged with biodegradable cellulose, boxed and delivered.

‘Growing for a market is far more challenging than growing for oneself,’ Rob explained. ‘It forms part of our training.’

Rob showed us the list of orders through local schools and UCT. The aim is to sell vegetables in a direct, friendly and personal way. It is a win-win arrangement. Big boxes sell for R95 and small ones for R65, with half the profit going to the farmers and half towards Abalimi’s operational costs. The profit is used to train more farmers, and 10% of the crop goes to charity each week; an inspiring example considering that profits are small.

Abalimi’s programme has a low carbon footprint, creates food security and jobs, and is sustainable. It is a model that works and can be copied in urban areas across the country. Government has often neglected small-scale farming in favour of subsidising intensive commercial farming that generate big profits without paying for the environmental damage.

Abalimi therefore offers an important and missing part of the agriculture equation in South Africa. Let’s hope that others will see what needs to be done and how simply it can be achieved.

‘Farming is not like any other business,’ Rob said in parting. ‘It needs love and support, its alive, like a family.’