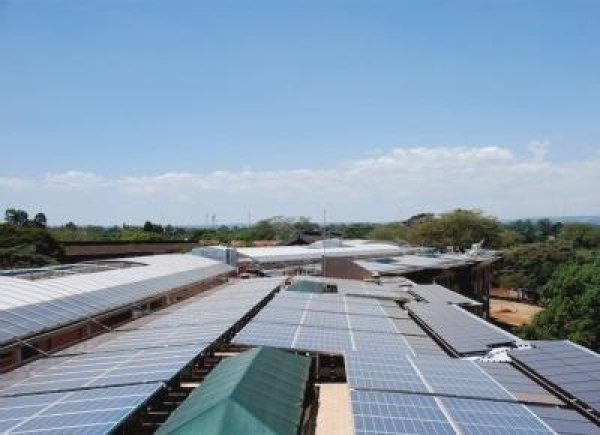 Africans in the small community of Tsumkwe, Namibia, have something they haven’t had for three years: electricity 24 hours a day. Juwi Solar, a company headquartered in Germany, has installed a hybrid solar system in the community that supplies all public buildings and 100 households with round-the-clock power.

The project, reported by Renewable Energy Magazine, is being called one of Africa’s largest off-grid solar power systems with a generating capacity of 200 kilowatts (kW), battery storage of 1 megawatt (MW) and three integrated diesel generators. The system was constructed in just six weeks by Juwi with the help of its regional partner, Alternative Energy Systems.

Previously, the community’s power supply consisted of a diesel generator that could only be used for up to three hours per day because of rising oil costs. With the new solar power source, the community has electricity around the clock to power its hospital ward, water supply, street lights, police station, radio station and mobile communications network.

‘The installed 918 polycrystalline modules supply Tsumkwe with 100 percent clean power during the day,’ Juwi said. ‘Three diesel generators are integrated into the system and can be switched on in the evening or in case of a low battery.

The power will be operated by the local company, NamPower, and local technicians have been trained by Juwi to ensure proper operation and maintenance of the system. Juwi officials say they hope to have set the standard with the project and want to replicate its success to additional African communities.