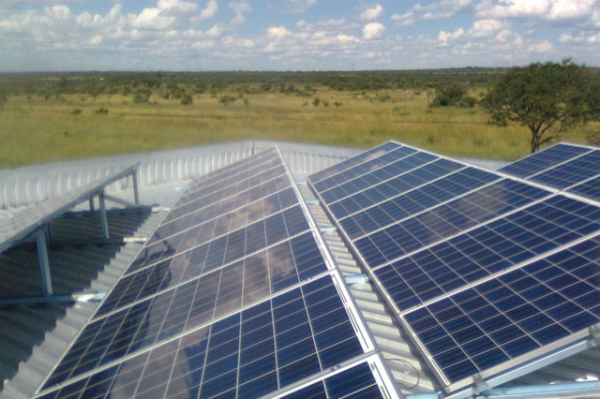 Zimbabwe has kicked off a major road upgrade project with the opening of a toll plaza that is believed to be the world’s first to meet all its electricity needs without a grid connection.

The plaza, about 20km from Bulawayo, derives the bulk of its electricity from arrays of solar panels on the roof over the lanes and collection booths, which charge two battery banks for night-time power. Diesel generators have been installed as a back-up to supplement the solar supply if there is a shortfall in winter, when there are fewer hours of daylight.

This is the first of eight toll plazas to be built by South Africa’s Group Five International as part of a project to upgrade an important route across Zimbabwe, running between Botswana in the west and Mozambique in the east and serving the major cities of Harare and Bulawayo.

Arup is providing civil, structural, mechanical and electrical, public health and infrastructure engineering services to Group Five for the upgrade.

Engineers in Arup’s Johannesburg office had the task of developing a suitable off-grid power supply for the plazas. To demonstrate the viability of the solar scheme, they created a model to simulate expected seasonal generation and daily load trends. This established that solar panels could supply more than 80 per cent of the required load, with diesel generation provided as back-up.

Paul Trewartha, senior electrical engineer and electrical design manager on the project, explained that an essential element was reducing the total electrical demand of the plazas from around 30kW to about 17kW, which they achieved by using energy efficient lighting and by implementing an innovative electrical load management system.

Lighting is the major load, he explained, especially overnight. “We changed the lighting from conventional metal halide lamps to what we call chemical LEDs, or organic LEDs, which has halved their power requirement, at least,” he told E&T. “That brought us nearer to 10 or 12kW, and the plaza is actually running in the day at about 4 or 5kW, and at night 10 or 11kW.”

Although the OLED lights are a very new technology, they are commercially available, Trewartha said. “They’ve been proven in the States, as well as the Middle East, where they’re using them for street lighting under very severe conditions such as the heat and the sandstorms. They really look very nice on the plazas.”

The 820km Plumtree to Mutare road upgrade is part of a Zimbabwean government initiative to improve the logistics network and support trade and economic growth.

The project is a joint venture between the Zimbabwe National Road Administration (Zinara) and Group Five, with funding provided through a loan from the Development Bank of Southern Africa (DBSA). Tolls will be used to recoup part of the investment.