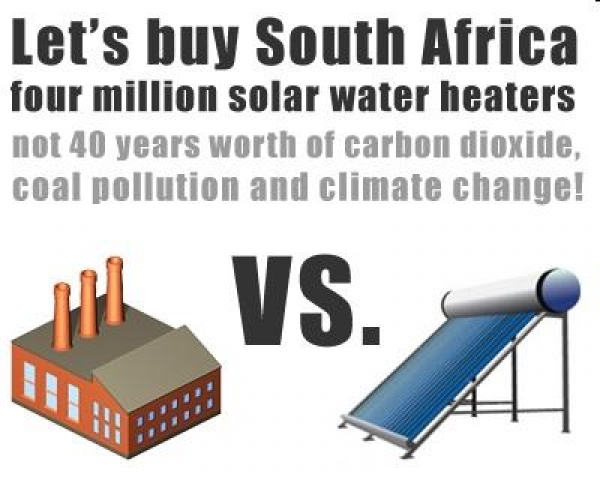 Let’s buy South Africa four million solar water heaters, not 40 years worth of carbon dioxide, coal pollution and climate change! As part of the 2010 Climate challenge and in partnership with Project 90 by 2030, OXFAM, 350.org and Urban Sprout, Activist is running the Solar Water Heater Campaign.

South Africa is warming up three times faster than the rest of the world. While there is currently furious debate about South Africa’s energy development path, the country continues to be perceived as one of the world’s biggest coal-based economies. Relative to our size, we contribute far more than most countries to climate change.

Let’s use the sun

But South Africa is, as we know, also one of the world’s sunniest countries. We also still have a great many households not on the national electrical grid, and a great many people who are unemployed. Taken together, all these factors make for an incredible opportunity. Instead of building huge amounts more coal burning power capacity, South Africa can and should dramatically expand the number of domestic solar water heaters.

The South African government has already committed to increasing the number of installed solar water heaters, and has instituted subsidies to support homeowners who want to switch to or supplement with solar.

According to our calculations, backed up by local expert assessments, the South African government could buy 4 million solar water heaters for R60 billion, instead of continuing to invest in a dirty energy supply.

This is half the cost of Eskom’s Medupi coal power station and would provide 20% more energy – 4 million solar locally manufactured water heaters would supply the equivalent of 5,600MW, while Medupi will provide only 4,800MW. Over twenty years 5600 MW from solar water heating would avoid 240 million tons of carbon dioxide emissions, as well as reducing other coal-based pollution, strains on our water supply, reducing energy inflation, and creating many more jobs. We are currently in the process of building two gigantic coal-powered stations. Each of these will make a greater contribution to dangerous climate change than many smaller African countries put together. It may be too late to stop the building of Medupi, but there is still time to avoid further investment in Kusile and spend the money in a sustainable way instead – the provision of 4 million free domestic solar water heating systems.

No time to lose

Africa and Southern Africa particularly, are more vulnerable to climate change than most countries. South Africa is warming up three times faster than the rest of the world (one degree in just the last 30 years, while the world warmed 0.74 degrees over the last hundred years). We are the last people who should be competing with the rest of the world to do as little as possible. It makes no sense for us to be contributing more than most countries to climate change when we may experience some of the worst effects.