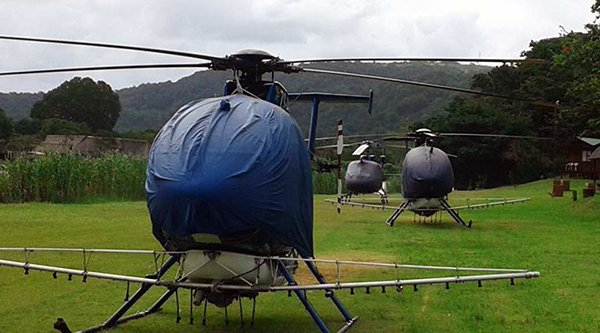 Now you can voice your concern about the toxic spraying in the Transkei.

In 1995, the South African Police Service (SAPS) began the aerial spraying of cannabis in the rural former Transkei. Every year since 2000, three SAPS Air Wing squirrel helicopters (donated by the American DEA) arrive at a luxury resort in Port St Johns on the Eastern Cape’s Wild Coast. For 3 – 4 weeks, from dawn to dusk, they spray a glyphosate-based product (we believe to be Kilo/WSG or Kilo MAX) over South Africa’s most impoverished communities.

The glyphosate spray not only destroys cannabis but also food crops that families depend on for survival and entire ecosystems, including wildlife, rivers and streams and the very soil itself. Communities report the deaths of young animals, including calves and goats and pregnant animals aborting following spraying. Adults and children also suffer itchy rashes and severe respiratory difficulties that are misdiagnosed as TB.

The SAPS are breaking the law

Both the Kilo product safety guidelines and South African National Standards (SANS 10118) are very clear about requirements for responsible usage but SAPS fail to adhere on several counts. A prime example is failure to notify people in advance so they can clear their families and animals from the land. The practice also contravenes the Constitution on several counts and is clearly an exploitation of people who don’t know their rights and don’t want to incriminate themselves (which they have a constitutional right not to be compelled to do).

Furthermore, as far as our (extensive) research shows, SAPS have not reviewed either the effectiveness, appropriateness or safety of this method of eradication in over 10 years – in which time an abundance of relevant, credible, independent scientific research has been published on the rights of indigenous peoples, drug policy reform and much more.

In March 2015, the International Agency for Research on Cancer (IARC) published an in-depth study of glyphosate. The results of their findings led the World Health Organisation (WHO) to re-classify glyphosate as a Grade 2A carcinogen – meaning is probably causes cancer in humans.

Glyphosate is the world’s most commonly used herbicide – so much that it is now found in human breast milk and urine. Following WHO’s re-classification of glyphosate as a carcinogen, Columbia suspended all aerial spraying of their coca fields in May 2015. It seems most of the rest of the world are unaware that it is still happening in the Wild Coast of South Africa’s Eastern Cape (former Transkei), home to the country’s already most impoverished rural communities.

This is NOT an issue of whether cannabis should be legalised (despite its deeply rooted history in South African culture). The cannabis debate distracts attention from the human, animal and environmental rights being gravely violated. For as long as cannabis is illegal, alternative methods of eradication or investment in alternative developments to help bring these communities out of poverty need to be considered.

By signing this petition, you are asking the SAPS to suspend ALL aerial spraying of cannabis pending evidence of no harm to people, animals and the environment.

Shocking drug wars in the Transkei

The other day I visited an expensive lodge on the banks of the Mzimbubu river, Port St Johns, South Africa, where I found the 3 spray-copters in the photo. Apparently they are using Round-Up Ultra (the new Agent Orange), from Monsanto to kill thousands of hectares of Cannabis on the remote steep slopes of the Transkei. The spraying will continue until April, March when the crop is harvested.

When these choppers spray large areas of soil they not only destroy these valuable crops but also entire ecosystems- the land then looses much of it’s top soil and when it rains the rivers carry thousands of tons of rich fertile soil into the ocean. It is devastating! (This soil loss is also caused by poor planting methods and over grazing – mostly by goats). The Transkei is a particularly poor part of SA with many people struggling to subsist, hence the high crime rate, which in turn discourages tourism. It’s a vicious circle! These coppers not only spray fields but also people and animals. It allegedly CAUSES CANCER!

The pilots tell of heart-rending stories of entire villages on their knees, beseeching them not to spray, and of one old woman hobbling into the fields waving a white flag. Much of Port St John’s and Lusikisiki’s economy is dependent on Cannabis growing. South Africa is a signee to various International anti-drug agreements and the spraying that occurs twice annually is apparently funded by UN and UC. The local communities vote for a national governance that makes agreements with foreign nations to destroy one of our most valuable crops.

Smoking cannabis is an African tradition

Besides being economically viable for the people of this region, Cannabis and Hemp offer many medicinal and other wonderful benefits to humanity and the global ecosystems.

P.S. South Africa is one of the largest producers of Cannabis and Africa is apparently the largest consumer. At the moment it is very difficult to buy local good quality ganja in the Transkei. Most of the stuff currently being sold all over SA comes from Swaziland and Lesotho!