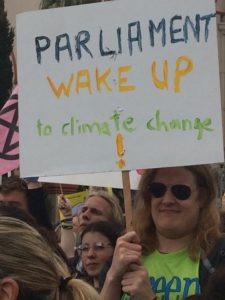 In cities across South Africa people protested on Friday to raise awareness of climate change. The Global Climate Strike runs from 20 to 27 September, ahead of the United Nations Climate Action Summit, taking place in New York.

People are stepping up in over 150 countries to support young climate strikers and demand an end to the age of fossil fuels.

Over 1,000 people, mostly school and university students, marched to Parliament in Cape Town.

18-year-old Ruby Sampson, the founder and leader of the Youth and Pan African wing of the ACA, said that she is disappointed that President Cyril Ramaphosa was not attending the UN Summit. “We want Ramaphosa to declare a climate emergency,” she said.

An energetic crowd of children, some wearing their school uniforms, marched from Keizersgracht (Hanover) street in the city centre to the gates of Parliament, where there was a programme of speeches (including one by Thabo Makgoba, Archbishop of Cape Town), hip hop performances by Mixed Mense from Heal the Hood and the handover of a memorandum.

Phindile Maxiti, the City of Cape Town Mayco Member for Energy and Climate change, who addressed the crowd, said that the City supported the strike and was “at the forefront of sustainability”.

“As a local council, we will submit your memorandum to the president,” said Maxiti who also described Cape Town as a water-wise city, following the city’s drought.

People attended from across the city, including Mfuleni, Khayelitsha, Delft and the southern suburbs.