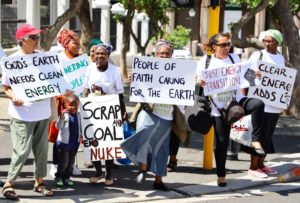 “The ongoing issues from the Fukushima nuclear disaster in Japan, which happened ten years ago this month (11 March), is a stark reminder of the many compelling arguments against any new nuclear for South Africa.” So says the Southern African Faith Communities’ Environment Institute (SAFCEI) and Earthlife Africa Johannesburg. Interested and affected communities also raised these arguments with the National Energy Regulator of South Africa (NERSA) – at the Nersa hearings that were held on 23-24 February – to challenge the government’s proposal to add another 2500MW nuclear to the country’s energy mix.

According to SAFCEI’s Executive Director Francesca de Gasparis, “There is still too little relevant information available in the public realm. We need to know how these plans could affect us. Even when requested via official means, information is either missing or unclear. In its role as energy regulator, NERSA must take the principles of the National Environmental Management Act (NEMA) into account in its decision on whether to concur with the Minister’s determination for more nuclear energy. To achieve the sustainable development of our electricity supply infrastructure that seeks to benefit all South Africans, a transparent cost-benefit analysis should be conducted to ascertain the feasibility of new nuclear generation capacity. This has not been done.”

“Minister Gwede Mantashe has made the decision to procure 2500MW new nuclear, without demonstrating its affordability or necessity. Firstly, the latest Integrated Resource Plan (IRP) of 2019 did not include new nuclear energy as a requirement to meet our energy needs. Minister Mantashe at least should have afforded Nersa with credible and up-to-date information for consideration, which then should be made available, along with independent research demonstrating need and cost-benefit, to the public to enable informed public participation and decision making,” says de Gasparis. 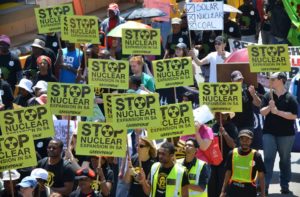 Earthlife’s Makoma Lekalakala adds, “South Africa cannot afford to waste any more money on costly nuclear experiments, such as with the failed Pebble Bed Modular Reactor in the early-2000s. Not only did that initiative not produce a single unit of energy, it cost taxpayers in excess of R10-billion. This kind of wastage of government funds, in our CoVid reality and after the devastating budget delivered by the Minister of Finance, will cripple our country.”

In 2017, Earthlife and SAFCEI took the government to court over the last nuclear deal, which was ruled unconstitutional and unlawful. By doing this, these organisations and their community partners saved the country from a R1-trillion nuclear deal that would have completely bankrupted the country. If we consider how the government has conducted itself in the past, on top of the lack of transparency that we are seeing now, the current developments in nuclear energy do not instill a sense of confidence that this government will act in the interests of all South African citizens by insisting on more nuclear energy to SA.

Lekalakala says, “The idea that affordability can only be determined by ‘testing the market’ through procurement, as was suggested at the Nersa hearings, is putting the cart before the horse. Affordability is exactly what we need to know in order to determine if the country can afford it. We believe that if the Minister’s proposals could be robustly interrogated with the data on which they are based, that it will become even more glaringly obvious that nuclear energy is a bad idea for SA. Therefore this information must be in the public realm before the determination and the procurement process has started. If, as according to independent research, nuclear energy is found to be more than double the cost of other energy sources, then the government will have found it made the wrong choice and the procurement will be very difficult to stop, and more money would have been squandered.” 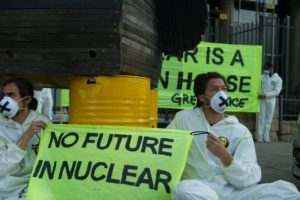 According to Peter Becker of the Koeberg Alert Alliance, ten years after the Fukushima nuclear disaster and the price tag for clean-up continues to rise, now estimated to be R2.8 trillion. Radioactive water is accumulating at over one hundred (100) tons per day, and despite hundreds of tanks which have been installed on the site, some of this water is being released into the sea.

In South Africa, as a result of Eskom’s legacy of poor maintenance of its coal-fired plants, we now sit with rolling blackouts, or ‘load shedding’. Recently, the cracks detected in the containment building at Koeberg have become cause for concern, particularly since Eskom is attempting to keep secret the extent of the damage, and progress of repairs. Therefore, the plan to extend the life of this deteriorating plant by more than two more decades, amounts to an unjustifiable risk, especially in light of Eskom’s historic inability to do effective maintenance. It appears NERSA has been exposed to a very one-sided view of the benefits of nuclear power and is ignoring the reality of the economics as well as the risks of nuclear power,” says Becker.

The organisations believe that Nersa should do some of their own research to corroborate facts presented, then apply themselves to make the most sensible decision. If they do this, they believe that Nersa will come to the inevitable conclusion that nuclear energy is an absolutely bad idea for South Africa, as it is a lifetime commitment that it will continue draining money, long after the power plants have closed.

Prof. Steve Thomas, who contributed to the joint submission says, “In light of SA’s experience and in the face of the ‘climate emergency’, we cannot justify nuclear or any energy options that will come with a high price tag, but would be slow to implement and may not even deliver anything in the end. The time has come to invest in more renewable energy that is already proven to be safer, cleaner, and more sustainable, and can come online much quicker, on top of being more affordable. Renewable technologies are developing rapidly, like off-shore wind, for example, are now competitive and proven.”