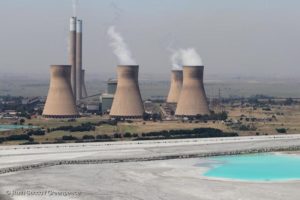 Aerial view of Arnot Power Station in Mpumalanga. The colour of the waste water is an indication of high toxicity levels.

South Africa saw a sharp decrease in Sulfur Dioxide (SO2) emissions in 2019, bringing the country’s emissions to their lowest level on record, according to new research by Greenpeace India and the Centre for Research on Energy and Clean Air (CREA).

A significant drop in emissions would increase the quality of life for thousands of South Africans who suffer from respiratory and other illnesses as a result of air pollution, and would save South Africa billions of rands in medical costs and work days lost.

The fall likely resulted from temporary reduction in coal-fired power generation, which led to load shedding. While encouraging at first glance, South Africa’s emissions are still well above what is recommended by the World Health Organisation.

“It is so unfortunate that we cannot celebrate this reduction in emissions as an indication that the South African government is trying to protect the people of South Africa. Instead, it is an indication of their ineptitude at dealing with corruption at Eskom. It is years of mismanagement that cause our air pollution levels to drop – not because there were deliberate measures taken to drop them, but because the power tripped,” said Nhlanhla Sibisi, Climate and Energy Campaigner for Greenpeace Africa.

Further research is needed to better understand the drop in emissions. Data suggest that load shedding may account for the reduction in emissions from 2018 to 2019 (2019 was one of the worst years of load shedding for South Africa, exceeded in severity only by 2020); the national lockdown implemented as a result of the COVID-19 pandemic may account for the decrease in emissions in 2020. In either case, the decrease is categorically not due to any proactive action by government to curb South Africa’s air pollution crisis – on the contrary, the National Air Quality Officer has yet to announce her decision on whether to grant Eskom further postponements from compliance with MES, and the DEFF gazetted the weakening of South Africa’s SO2 emissions limits in March 2020 (with the new limits effective from 1 April 2020).

Exposure to SO2 pollution at the scale at which it is present in South Africa can lead to severe health problems, including dementia, fertility problems, reduced cognitive ability, heart and lung disease, and premature death. In addition, combustion processes which release SO2 into the air – such as burning fossil fuels such as coal – also release other pollutants, including fine particulate matter and greenhouse gases which contribute to global heating and, inevitably, drive Africa’s growing climate crisis.

“The COVID-19 pandemic has accelerated action around the world aimed at driving Just Transitions away from fossil fuels; yet the South African government continues to drag their feet. There is no more time to waste. Investors are pulling out of coal projects locally because they recognise the dangers posed by burning fossil fuels. South Africa could lead the world on this journey, if our politicians would only wake up,” ended Sibisi.