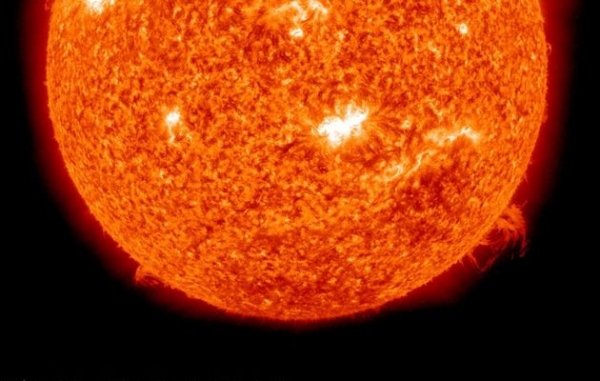 The delicate threads that hold modern life together are dramatically cut by an unexpected threat from outer space, with disastrous effects.

It’s the stuff of science fiction usually associated with tales of rogue asteroids on a collision course with earth.

But over the next two years, as the sun reaches a peak in its 10-year activity cycle, scientists say there is a heightened risk that a whopping solar storm could knock out the power grids, satellites and communications on which we all rely.

“Governments are taking it very seriously,” says Mike Hapgood, a space weather specialist at the Rutherford Appleton Laboratory in the UK. “These things may be very rare but when they happen, the consequences can be catastrophic.”

Hapgood said that solar storms are increasingly being put on the national risk registers used for disaster planning, alongside other rare but devastating events like tsunamis and volcanic eruptions.

The statistics support this, he said. There is a roughly 12% chance of a major solar storm every decade, making them a one-in-a-hundred-year event. The last major one was over 150 years ago.

The threat comes from the magnetically-charged plasma which the sun belches out in so-called coronal mass ejections. Like vast bubbles bursting off the sun’s surface, they send millions of tonnes of gas racing through space that can engulf the earth with as little as one to three days warning.

The geomagnetic storms they stoke can induce strong currents in national power grids that literally melt the expensive transformers that form the cornerstones of the system.

The failure of a large part of India’s fragile power grid this week was not related to geomagnetic storms but it does give a taste of the chaos that can ensue. Trapped miners, stranded trains and hospitals plunged into darkness, and this is a country where up to 40% of the population is not connected to the national grid..

Scientists say satellites can also be damaged or destroyed, as charged particles rip through them at hundreds of miles per second. It’s an issue the satellite industry is not keen to talk openly about.

“A few will still publicly deny that there is a problem,” said Hapgood, blaming the fear that being first to admit the problem could put a company at a commercial disadvantage.

“We have a way to go before we reach the point where the market accepts that this is a universal problem and gives the advantage to the guys who make a virtue of their ability to deal with space weather.”

Radio communications with jetliners can also be knocked out as the solar storm messes with the ionosphere, the region of the earth’s upper atmosphere through which long-range radio waves travel.

When there is a threat, airlines re-route planes to lower latitudes where they are less exposed. It’s not quite routine but it isn’t that rare either, and it adds to the fuel bill.

It’s a threat that is ‘low frequency, high severity’ in insurance industry jargon, which governments have only recently started taking seriously.

“Politically, it started to get some purchase about three years ago,” says Andrew Richards, a severe risk analyst at National Grid, which runs the UK electricity network. “We know they are real effects but we are nowhere near there, in terms of our understanding.”

Teams of scientists in North America and Europe spend their days and nights monitoring the sun and issuing warnings to governments, power companies, satellite operators and airlines.

But exactly how much to worry is unclear, because proper scientific understanding about space weather is based on incidents and work done only in the last 20 to 30 years, the blink of an eye in solar terms.

In 2003, a magnetic storm triggered malfunctions in 47 satellites and led to the complete loss of one worth $640 million, according to the British Antarctic Survey, which this year launched an EU-funded space weather forecasting service for the satellite industry.

Before that, a 1989 storm was blamed for taking out the entire power network in Quebec, Canada, within 90 seconds that left millions of people without electricity for nine hours.

But the only really big storms that provide any meaningful reference point for how bad it could be, happened long before the development of nationwide power grids, the internet and mass air travel.

In 1921, a magnetic storm was blamed for putting the New York Central Railroad out of action and disrupting telegraph and telephone networks across Europe.

But the big one is known as the Carrington event in 1859, when British astronomer Richard Carrington observed and recorded a very large solar eruption that reportedly took just 17 hours to show up in the earth’s atmosphere. The aurora borealis — or North Lights — were seen as far south as the Caribbean.

Local news reports carried accounts of people in the northeast United States being able to read a newspaper in the middle of the night by the light of the aurora, and miners in the Rocky Mountains waking up and preparing breakfast because they thought it was morning.

The accounts are entertaining, but with about a thousand active satellites now in orbit around the earth, including the International Space Station, the damage from solar storms could present private operators like SES Global and governments with a bill in the billions of dollars.

It is hard to quantify how serious and pervasive a sudden and complete loss of electrical power could be for a modern economy, but this is precisely what a 2008 report from the US National Academy of Sciences tried to do. The result was alarming.

The effects of an extended outage lasting more than a few hours would include, it said, “disruption of the transportation, communication, banking, and finance systems, and government services; the breakdown of the distribution of potable water owing to pump failure, and the loss of perishable foods and medications because of lack of refrigeration.”

A separate NASA-backed report in 2007 estimated a Carrington-scale solar storm would cost the satellite operators a minimum of $30 billion.

That’s without the loss of revenues to the telecoms and broadcasting companies that rely on them and the hole it could leave in military security networks.

Andrew Richards said National Grid started commissioning research on the threat around 1996 and the company now monitors solar activity on a daily basis.

“We want to be prepared if something did happen,” he said. “There is a human tendency that if it hasn’t happened for a long time, to forget all about it.”

That rarity makes the risk hard to quantify. “It’s very hard to say how bad it could possibly be,” he says. “The sun could explode and we would all die, but modelling based on the most extreme events that we know of says we do not believe a catastrophic return to the stone age is on the cards.”

Based on that modelling, Richards says the worst-case scenario is that the voltage fluctuations get bad enough to cause a local or national blackout.

To guard against this, National Grid has opted for a more resilient transformer design since 1997 and has increased the number of spares it keeps.

This is no small task. The transformers have a 30-year lifespan, cost 2 to 3 million pounds each and there are 1500 of them in Britain alone. They are made by just a few global engineering groups, companies like Siemens and General Electric.

They run hot under normal circumstances but when a geomagnetic storm triggers an extreme voltage fluctuation the oil that insulates them can start to boil.

Richards said the record for replacing one of them is four weeks. “Imagine demolishing a family house, re-laying the foundations and then closing roads and bringing in a ready-made one on the back of a lorry. You can’t do it overnight.”

If the scientists raised the alarm, Richards and his sun-watchers would have a few days to get as many of the network’s transformers into action as possible in order to spread the electrical load as thinly as possible when the storm hits.

Other than that, he said, “it would give us five or six days to sit and think, and worry about what might happen.”

lonely sentinel sits between earth and the sun

Aside from earth-based observation of the sun, one of the few detectors monitoring the ‘solar wind’ is NASA’s Advanced Composition Explorer, which sits like a lonely sentinel about 1,5 million miles away in an orbit that keeps it directly between the earth and the sun.

Its detectors continually monitor the direction and speed of the solar wind, feeding data back to the Space Weather Prediction Centre in Boulder, Colorado, to give 15 to 45 minutes warning of any solar onslaught.

The insurance industry, which would take a hit, if satellites started dropping out of the sky, admits that the risk is a hard one to price.

Ludovic Amoux is a specialist underwriter at the world’s leading space insurer, Paris-based SpaceCo, which is owned by Allianz.

A screen grab of a solar spot in the centre of the Sun. Image by: NASA