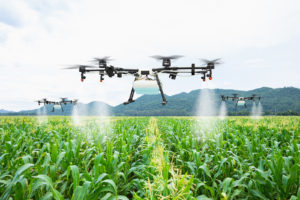 During the week people outside of our community realized that the SAPS were spraying cannabis crops using helicopters. Marijuana, dagga, weed, pot, ganja, Mary Jane, call it what you want but the ‘green grass’ were suddenly not so green anymore. The entire incident managed to achieve what weed allegedly didn’t do – it energized and aggravated everyone all at once.

This is not an argument for or against the use of marijuana. Neither am I trying to prevent the pilots or law enforcement from doing their job. My concern is with the bigger picture – the regular use of glyphosate-based herbicides and its effects on the environment.

In all honesty I proudly viewed myself as an environmentally caring individual. Conservation meant not littering; recycling every now and then and making a small donation to whomever advocated the loudest – o, and taking good care of my animals, right? If this describes you as well, then we have both failed miserably.

Conservation is the actions we apply to prevent injury, decay, waste, loss and to ensure the preservation of life and surroundings. It means to manage the environment, especially our natural resources. The fundamental key words here are prevention and management.

Everything is dependent on water. More importantly everything and everyone is influenced directly by the quality of our water. The environmental water quality (EWQ) is how close the physical, chemical and biological components of water are to its natural state. Freshwater resources are the most vulnerable to contamination. Certain herbicides are especially damaging to aquatic life, causing suppressed disease resistance, infertility and weight loss.

The Wild Coast at first glance is an untarnished virescent paradise. We do not have large industrial areas or other major pollutants. Wrong, our water has been exposed to a range of agrochemicals and contaminants for some time now.

Killing does not feed seeds of hope

If you have any doubts have a look at the herbicides which are for sale locally. Actually, you don’t even have to do that. Simply read-up on the Working for Water programme who readily admits to using glyphosate-based herbicides. This includes product brands such as Mamba, Tumbleweed, Ecoplug, Touchdown, Roundup® and Kilo Max. It is utilized specifically to kill invasive aquatic and terrestrial plants.

In 1990 Monsanto assisted farmers in this area in a programme known as “Seeds of Hope.” Packages were handed out containing GM maize seeds, herbicides and fertilizers. The community was encouraged to adopt the no- or low-till farming method which is cost and time efficient. Unfortunately this agricultural practice requires even larger amounts of herbicides.

Obviously the herbicide eventually killed some of the crop itself. To prevent this, the seeds were ‘modified’ so it would be herbicide resistant.

In 2002 the Government joined forces with Monsanto to implement the “Massive Food Production Programme” (ACB 2005). This five-year initiative focused on developing agriculture in the Alfred Nzo, OR Tambo and the Amatole Districts, basically the entire Eastern Cape and Wild Coast.

Farmers received subsidies for Roundup Ready® seeds, Roundup® fertilizers, herbicides and insect-resistant maize seeds. The end result was a large amount of glyphosate-based herbicides that are still in use.

Ecotoxicologists are very concerned about the obvious effects on non-target animals and humans. There are also serious questions about the rise in genetically modified glyphosate resistant crops (GMG-R). The more resistant the vegetation and weeds become, the greater the necessity to increase the quantities of herbicide.

The argument for the use of glyphosate is that it is less toxic because of its quick soil absorbency. It also dissipates faster than other herbicides. At first this seems reasonably logical. Toxicity tests discovered that in spite of the soil absorption rate glyphosate was released into water with bits of soil and sediment over long-term periods. Barata et al found high levels of the herbicide in water sources long after it was sprayed.

Herbicides such as Roundup® consists of a surfactant namely polyoxyethylene tallow amine or POEA, water and isopropylamine salt (IPA) the glyphosate. The active ingredients as well as the inert pose serious environmental risks. An inert typically functions as a type of binding agent; it dilutes, disperses or acts as a carrier. The manufacturer is not obligated to share the details of the inert with the public even if the inert is commonly more toxic than the active ingredients (Radosevich, Holt & Ghersa, 2007).

In the herbicide mixture Roundup®, POEA assists the glyphosate so that it is able to interact with the plant cells. Glyphosate transfers through the phloem, where the first phytotoxic attack on the plant can begin. POEA is skilled at preventing cells from absorbing oxygen. The goal is to damage the aromatic amino acid biosynthesis system through interference with the primary and secondary metabolism of the plant.

Glyphosate on its own is not harmless. When added to water it gradually changes the chemical composition until there is a dramatic increase in phosphorous and a decrease in oxygen. It has also shown to have devastating effects on the bone marrow of mice and the endocrine system of animals and humans (Prasad, 2009).

According to Dr. Sèralini, Monsanto’s glyphosate-based Roundup®, even if it was just the glyphosate on its own, decreased testosterone levels in the testis cells (Institute of Science in Society or ISIS, 2012). Cells died as early as twenty-four to forty-eight hours after exposure. This happened to cells that were introduced to doses ten times lower than those generally used in agriculture. Whenever glyphosate levels in genetically modified foods were increased, infertility rates also increased (Institute Of Science In Society, 2012).

The combination of glyphosate and POEA together is approximately four times more toxic than the active ingredients on its own. Embryonic, neonate and human placenta cells were also exposed to the glyphosate-POEA combination. The cells suffered inflammation, infection, oxygen starvation and death (necrosis). Interestingly, in animals, humans and plants the combination rendered cells more vulnerable to other toxins (Benachour & Sèralini, 2009). Glyphosate penetrate animal cell membranes as it does with plant cells and disrupts normal functioning.

Humans and animals are more susceptible to cancer after prolonged exposure. In Sweden, Dr. Hardell and Eriksson substantiated this, showing a correlation in the development of non-Hodgkin’s lymphoma, a group of cancers that target the lymphocytes when people were exposed to glyphosate and POEA (Hardell & Eriksson 2009).

Keep in mind that tests for toxicity in herbicides and pesticides are usually only done on the active ingredients and not on the inert itself or on the combination. In the majority of herbicides as much as ninety-fife percent consists of an inert.

In the Government Gazette, notice 1120, The Department of Agriculture, Forestry and Fisheries acknowledges the significance of our right to information as outlined by section 32 of our Constitution. This suggests an obligation to reveal which herbicides are in use, the short and long-term exposure risks and the availability of safer alternatives. It is important to note that in the same paragraph of the Gazette it specifies that: “…..commercially sensitive information will be suitably protected” (DAFF 2010).

Remember what conservation entails: action that manages and prevents injury, decay, waste and loss of life?

Even if you are dead set against the use of wacky weed it is essential to realize that not only the crops are being sprayed. Non-targeted vegetation, organisms, aquatic invertebrates, animals and humans are exposed to non-natural chemicals. The situation is magnified when the cannabis are hidden among other crops such as maize.

The bottom line is that our water sources are contaminated. Accurate research information is negligible. It is impossible to precisely treat, manage and prevent health and environmental risks without responsible joint decision-making.

The correct decisions cannot be made without exact and true information.

The Green Times has been reporting on glyphosate-related issues for years now. This issue needs a more organised civilian response, as this practice is rife across our country.