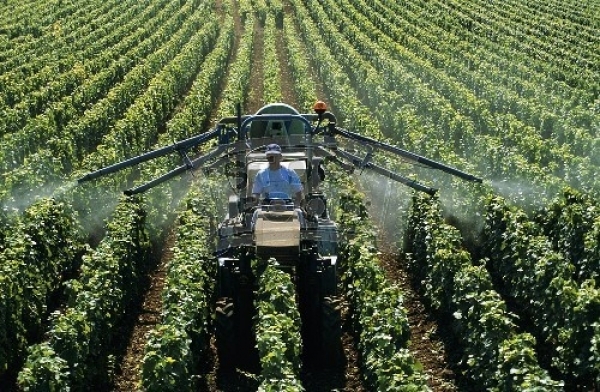 I trust it is safe to say that spring has finally arrived in the Cape. And with it comes gorgeous flower, blossoms, birds and beautiful burst of colour. I have already been lucky to receive in my garden an active team of bees pollinating my mostly indigenous flowers, unlike many parts of the world where the bees are disappearing due to illnesses and also the indiscriminate use of poisons on crops and trees.

Spring is also the time for pollen allergies, luckily easily resolved with homeopathic remedies. More about that here. What makes me sad is that spring also seems to be the time for poison sprays. Jurgen Schirmacher and his group TATIB (The Air That I Breathe) has had their hands full again with complaints from residents in the Boland area who are suffering from poison spray drifting into their homes. I’ve had a couple of calls myself.

The poison onslaught this time of the year seems to comprise mainly 3 groups of products:

The use of herbicides by local authorities to kill ‘weeds’ in residential areas in Stellenbosch and Somerset West. Those who are elderly, young or work from home are particularly at risk. Even Dr. Jo Barnes, epidemiologist from the University of Stellenbosch’s medical school and great water warrior, who lives in Heldervue, was ill for weeks since the City sprayed in our area. The products used were Pure Lawn, Hormoban and Lawntyl. Ms. Galant, Acting Director: City Parks told Bolander newspaper that these products ‘pose no health risks to humans.’

Residents were upset as they were not notified in advance, which means you cannot protect yourself against the spray drift floating into your house. The contractor maintained they had erected notices, but nobody in the area that I spoke to saw any such notices. Residents living in other areas of the Helderberg also called complaining from upper respiratory tract and eye infections, after witnessing the spraying of the sidewalks right in front of their houses.

I wonder why the authorities are not finding more creative solutions to the `problem’ of weeds. What’s wrong with pulling them out by hand, if you have to? Many of them are even medicinal plants; they could be harvested and put to good use. Perhaps they could even be used for biofuels? Or why not stop planting these thirsty, exotic lawns which now have to be protected against resilient, indigenous growth, which is normally what weeds are? Weeds in flower beds can easily be dug into the soil; they often provide just the right nourishment to the soil.

In the Paarl area the Drakenstein municipality sprayed the oak trees with fungicides against Oidium (powdery mildew) a fungal disease which attacks vines and oak trees. Products used were Tilt, Bumper and Rubigan. Follow these links and read the product labels â€“ they are scary.

This was followed by repeated complaints from residents about ill health after inhaling the spray drift blowing into their houses. Iain Smuts, a suffering resident, is threatening the municipality with legal action, as these agricultural fungices were not registered for residential use.

Once again the residents had not received the 48 hours prior warning, as the law prescribes. Mr. Jurgen Schirmacher (TATIB) wrote a letter to Ms Cathy Bill, Department of Environmental Affairs and Development Planning complaining that the NEMA requirements were not followed. Read more here.

A battle ensued at the Chameleons Montessori school on the Nitida wine farm in the Durbanville area, after numerous children and teachers suffered from red eyes, sinus problems, asthmatic coughs, allergies and skin rashes which erupt just when the farm’s spraying programme starts. Since connections were made between the illnesses and the spraying during the previous spraying season already, 3 teachers have left the school and 9 learners. The teacher who left earlier this year, Ms. Albe Albertyn, started struggling with her health 9 months after joining the school. She eventually broke a rib from a chronic asthmatic cough. Since leaving the school her health has been restored.

School parents tried to discuss this with those in charge, but to date the principal, Me. Emma Medell, the chairman of the governing body, Dr. Brendon Bailes and the farm owner Mr. Bernard Veller deny that there’s a link between the learners’ and teachers’ health complaints and the agricultural sprays.

A doctor who saw one of the children who left the school, and her partner treated another, Dr. Helen Muir, recommended that these children be removed from the school. Dr. Muir runs an Integrative Medical Practice in Durbanville and focuses on oncology, endocrinology, lifestyle and nutrition. She feels strongly that children should not be in areas where agricultural chemicals are sprayed.

‘I don’t blame the farmers, as the pharmaceutical companies assure them that their products are safe. A school with small children amongst vineyards that are sprayed from September to February/March is unacceptable. It should never have been allowed by the authorities.â€

‘In SA we don’t have sensitive enough blood tests to pick up low levels of toxicity. But the fact that it can’t be proven doesn’t mean that it doesn’t happen! I know what I see and experience in my patients. ‘

Dr. Muir sees many patients from wealthy areas bordering – and sometimes surrounded by – vineyards and other agricultural lands.

‘I see daily more cases of lung diseases that turn into asthma, endocrine problems, cancers and women who fail to fall pregnant.’

Farmers are blamed, but it’s the developers who get permission for the authorities to build residential houses next to farms.

‘It’s especially bad for children, as they are still growing and so their DNA is growing and dividing fast, creating many opportunities for mutations to take place.’

‘We have wonderful bodies that work better than computers. It has the ability to detoxify. But if you expose it over along period of time to poisons, your liver and kidneys won’t be able to metabolise it and you will experience symptoms like tiredness, muscle and joint pains, chronic respiratory diseases, skin problems and sometimes neurological problems and cancer.’

Parents must protect their children

‘Parents in such areas must know in advance when the farmers are going to spray, so they can shut their doors and windows and keep their children safe.’

Concerned parents from the school created The Galileo Group to highlight scientific evidence that proves that repeated exposure to spray drift from agricultural chemicals can indeed have severely negative health effects, even at low dosages, especially in children. The creator of this group is Mr. Ford Ballam, had removed his ten year old son, Joel, from the school due to ongoing health problems.

There are many more schools bordering non-organic farms. If you have children at such a school, read the TATIB materials, they have a team of doctors on their medical node. For our children’s sake this issue needs to come to light and be resolved.

Bees and vulnerable people suffer too

Who knows what these sprays could be doing to the bees and all the other creatures so much needed to uphold a healthy eco-system? See our letter about the problem experienced in the Franschhoek area this past week here. Then we’re not even touching on the threats to and suffering of those who administer these sprays (and their families), mostly without the prescribed protective clothing and masks. This is a story on its own, and one that needs to be told.

We know there are other alternatives to chemical sprays. I also understand that plants build up resistance and therefore more and more sprays are needed to have the same effect. I wonder if this is what’s happening here? There is also evidence that illnesses and bugs attack only weaker plants, and that these sprays in fact stress the plants out, which render them in time more susceptible to attacks. Sounds like a vicious cycle to me. Where is it going to end?

But there are other systems and sprays which in fact build up the immune systems of plants, making them stronger and more resilient.

Let’s focus on this next time. Write to us if you have something to offer by way of positive and creative solutions.