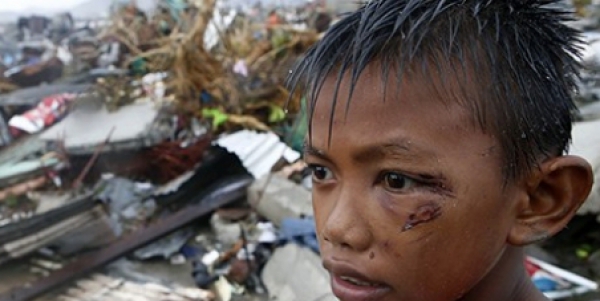 The horror of Typhoon Haiyan in the Philippines is unimaginable. Ten thousand people wiped away by a 25ft wall of water driven by 300km/h winds. A city of 200,000 people looks like a nuclear bomb hit it. It’s the worst storm on record, but it’s just the beginning, unless we act.

Right now the world’s powers are in a global climate conference talking about whether to hand over billions promised to help the most vulnerable amongst us when climate change disasters hit. Yeb Sano, the Philippines’ chief negotiator, just addressed the room, tearfully pledging a hunger strike until a real deal is reached to help his family, fellow citizens and all the other most vulnerable nations who are at the most risk for violent storms like this one.

Yeb is standing alone, facing a room of bureaucrats who are doing almost nothing to help. But if we bring the power of our 29 million strong community in to stand with him, we could change the tide and push the richest polluters to pay up now.

Yeb Sano, the climate negotiator for the Philippines, spent hours trying to reach his brother after the storm. He finally found him, part of a crew moving the bodies of victims so relief workers could begin clean-up. After hearing the news he gave an amazingly brave speech to the world’s climate delegates, saying:

“I speak for my delegation. But more than that, I speak for the countless people who will no longer be able to speak for themselves after perishing from the storm. I also speak for those who have been orphaned by this tragedy. I also speak for the people now racing against time to save survivors and alleviate the suffering of the people affected by the disaster. We can take drastic action now to ensure that we prevent a future where super typhoons are a way of life… What my country is going through as a result of this extreme climate event is madness. The climate crisis is madness. We can stop this madness. Right here in Warsaw.”

We owe it to the victims of Haiyan, and all future storms like it, to think bigger picture than our leaders are. Climate change killed them. And climate change is what we need to stop. A greater commitment to fund climate change management efforts is a key piece in the global deal we desperately need to save the world. And the richest countries have already pledged millions for this effort! So far, almost none of the money promised has arrived, but this can and must change. And the tragedy of the Philippines right in the middle of the climate conference is our chance to make it happen.

Yeb ended his speech by writing a pledge to everyone:

“In solidarity with my countrymen who are struggling to find food back home and with my brother who has not had food for the last three days, in all due respect Mr. President, and I mean no disrespect for your kind hospitality, I will now commence a voluntary fasting for the climate. This means I will voluntarily refrain from eating food during this COP until a meaningful outcome is in sight.” Together, our movement can rise to this challenge, and bring hope to him and his family and generations of our most vulnerable world citizens.