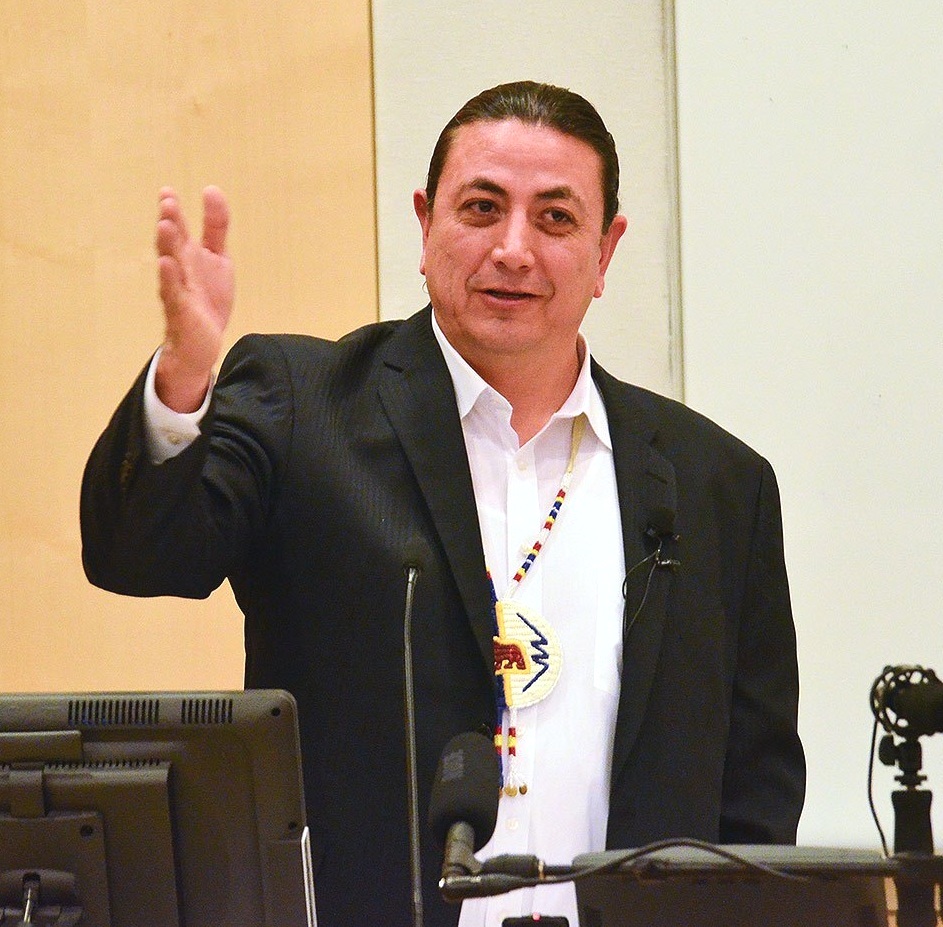 The Standing Rock Sioux’s fight against the pipeline began in 2014, when Energy Transfer Partners announced plans to build a 1,172 mile pipeline that would pump 470,000 barrels of oil a day from North Dakota to Illinois, according to an Energy Transfer press release. The conduit would run beneath a lake on the border of the Standing Rock Sioux’s tribal lands and cut through land the Sioux believe was taken from them unlawfully, Archambault said.

Tribal leaders objected to the pipeline for two reasons, Archambault said. For one, it would damage lands considered sacred by the Sioux, including burial sites. And secondly, a burst or leak where the pipeline crosses the Missouri River would be catastrophic to the surrounding environment.

More than just an environmental disaster

Water holds a special significance for the Sioux, Archambault said, and an oil spill in the Missouri, which spans the length of their reservation’s eastern border, would be more than just an environmental disaster.

“Water is part of our ceremonies. It’s a source of life,” he said. “We don’t want oil in our water.”

In 2016, despite protests from tribal leaders and environmental activists, the Standing Rock Sioux received a notice that construction was slated to begin.

“All of our efforts fell to the wayside,” Archambault said.

Archambault and other tribal leaders filed a request for an injunction in federal court to halt the pipeline’s construction, arguing it would destroy sacred sites and threaten their drinking water.

“We knew our chances were not good. Throughout history, federal courts have never sided with tribes,” he said. “The deck was stacked against us.”

U.S. District Court Judge James Boasberg ruled against the injunction, saying the Standing Rock people had been given adequate warning by the U.S. Army Corps of Engineers, which issued the permit for the pipeline.

“This case has highlighted the need for a serious discussion on whether there should be nationwide reform with respect to considering tribes’ views on these types of infrastructure projects,” the joint statement of the DOJ, DOI and Army read.

People from across the country flocked to the Standing Rock reservation throughout the latter half of 2016, braving North Dakota’s snowstorms and freezing temperatures in the waning months of the year to protest the pipeline. Archambault estimated the protesters numbered around 10,000 at the movement’s peak.

President Donald Trump ordered an expedited review of the Dakota pipeline on his fourth day in office. Two weeks later, Robert Speer, acting secretary of the Army, gave Energy Transfer Partners the go-ahead to finish the pipeline, according to the New York Times.

Archambault was en route to a meeting with a White House aide when he heard the news.

After Speer’s order, the Standing Rock and Cheyenne River Sioux sued — again — to stay construction. But the same judge who four months earlier denied their request for an injunction ruled against them a second time. On Monday, Judge Boasberg refused to halt work on the pipeline, which could be operational in as few as 30 days, saying the pipeline currently poses no threat to the tribes’ well-being.

Archambault said the tribes are now appealing on the basis of treaty rights, which guarantee them access to hunting, fishing and water within their lands.

“This is a key step toward the completion of this important infrastructure project, which has faced months of politically driven delays and will allow for safe transport of North Dakota product to market,” he told The New York Times.

President Trump’s support of the Dakota Access pipeline came under scrutiny when it was revealed he had owned stock in the project’s owners. A 2015 disclosure showed him owning a share in Energy Transfer Partners estimated between $500,000 and $1 million. When he sold the holdings in the summer of 2016 their value had fallen below $50,000, according to his spokeswoman Hope Hicks.

Big oil has seeped into Congress, Archambault said, and he expects its influence to do nothing but grow in a Trump White House.

“You know why this has petroleum in it?” he asked, holding up a water bottle. “Have you heard of the Koch brothers? They own Congress.”

The camp of demonstrators at Standing Rock has now dwindled to about 200 people, and Archambault has encouraged protesters to pack up and go home. The ice has dammed the river, he said, which could break free and sweep through the camp at any moment.

Archambault said some members of his tribe have misinterpreted his concern for safety as selling out to the oil companies. Some have even accused him of taking payoffs.

“I was put in a hard position,” he said. “Because my priority has always been the safety of the people.”

His decision-making has led him to reflect on deals struck by past tribal leaders, who he once scorned for selling out to federal agents, parceling away tribal lands treaty by treaty, piece by piece.

“Those leaders back then — they were thinking about me,” he said. “And I’m here because of them.”

A Trump presidency threatens indigenous people and the future of his tribe in more ways than one, Archambault said, and he envisions four years of fighting the administration at every turn.

“With this new president coming in, everything is going to be attacked — our economies, our healthcare, our education. It’s a real threat, and we have to stand up and go beyond this pipeline,” he said.

The Standing Rock Sioux will lead a march on Washington D.C. on March 10, and Archambault called for activists to organize similar demonstrations in their home cities.

“This movement — it’s an awakening,” he said. “It’s time now. It’s time to do something, and sit back no longer.”