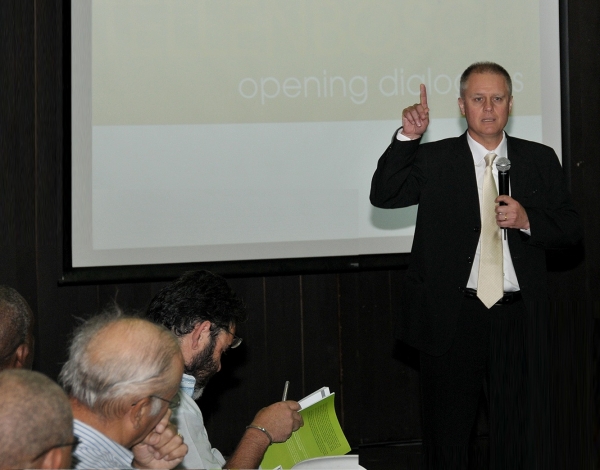 “Privileged kids often have breakfast in the morning with a value of around R150, so asking for a living wage of R150 is reasonable,” he said.

Smuts was speaking at a workshop around a new Stellenbosch University (SU) book, Sustainable Stellenbosch – Opening Dialogues. The event took place at the Sustainability Institute in Lynedoch.

Earlier in November, the Winelands and surrounding areas of the Western Cape were rocked by farmworkers protesting against their official minimum wage of R69 a day. Their strike was suspended to allow for negotiations, but Tuesday, 4 December has been set as deadline for the minimum wage to be increased to R150 a day.

Poverty and inequality spills into protest

In his remarks at the book launch, SU Rector and Vice-Chancellor Professor Russel Botman described the labour protest on farms and service delivery protest elsewhere as a “warning sign of the crisis caused by poverty and inequality.”

“Too few people understand we are sitting on a time bomb. There is a growing sense of social anger that I am very worried about.”

In his chapter in the book on poverty, sociologist Professor Joachim Ewert points out that Stellenbosch has a Gini coefficient – an indicator of inequality – of 0,61. This is higher than the Western Cape average of 0,59.

Botman welcomed the book and the process of engagement around the issues it raises. Sustainable Stellenbosch is an interdisciplinary collection of essays by 50 leading researchers and practitioners in diverse fields about the challenges facing the town and surrounds. These range from energy, water, sewage, solid waste and mobility, to biodiversity, public health, urban planning, housing, social development, art and cultural transformation.

“We will secure the future only once every child born in Stellenbosch feels welcome. Only then will we be safe,” Botman said.

Around 150 stakeholders from a variety of sectors in the greater Stellenbosch area attended the book launch, which took the form of a day-long workshop. They represented the University, the Municipality, organised business, ratepayers, residents of informal settlements and non-governmental organisations.

“What we are doing here is to widen and deepen the set of dialogues that have been taking place in Stellenbosch for some time now,” Professor Mark Swilling, one of the book’s editors, said. He is Programme Director of the Sustainable Development Programme at SU’s School of Public Leadership.

“We face many challenges, but we also have an abundance of knowledge and a remarkable capacity for innovation in Stellenbosch. What we must do now, is to deploy this to the benefit of the town and its people.”

The book emerged from the Stellenbosch Rector-Mayor Forum established in 2005 to facilitate discussions between the University and Municipality about the challenges facing Stellenbosch and ways of combining forces to generate solutions. The book is based on research supported by the National Research Foundation (NRF) and by the TsamaHub, an initiative of SU’s HOPE Project, through which seemingly intractable societal challenges are being tackled.

“Our collaboration with the municipality has taught us the value of leaving our ivory tower as academics and getting our hands dirty in our own community,” Botman said.

“Our immediate environment is our ‘first laboratory’ as researchers. This enriches our work as academics with real-world input. The benefit for society is relevant and socially responsive research, teaching and community interaction emanating from Maties.”

Smuts described “the energy and insights of academia, the business sector and other stakeholders” as “extremely important for the future of the municipality.”

“We want to improve service delivery to all in Stellenbosch,” he said.