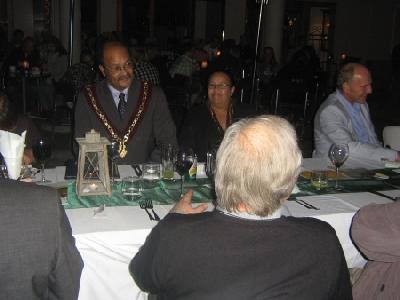 Stellenbosch celebrated an inaugural Earth Hour outdoor dinner at tables down the middle of streets closed to traffic in the historical centre of town. Church and Andringa streets turned into an earth party as 8 restaurants participated in feeding concerned folk in sync with the biggest global action ever for Earth.

Stellenbosch was one of 4000 cities and towns across the world who communally turned off their lights from 8.30 to 9.30 pm last night.

A record 126 countries world-wide participated. Around the world, Earth Hour was embraced by all walks of life, transcending race, culture, age and economics as individuals took leadership in their communities in the pursuit of a climate change solution.

United Nations Secretary-General, Ban Ki-moon said, ‘The message of Earth Hour is simple. Climate change is a concern for each of us. Solutions are within our grasp and are ready to be implemented by individuals, communities, businesses and governments around the globe.’

South African Nobel Peace Prize Winner, The Most Reverend Archbishop Desmond Tutu said in Cape Town, ‘Earth Hour is an opportunity for every man, woman and child from all corners of the globe to unite and show the world that by working together we can win the battle against global warming.’

He also said that global warming should be taken as seriously as apartheid. Earth Hour is annually organized by the World-wide Fund for Nature (WWF). 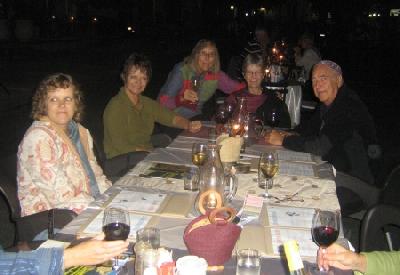 In Stellenbosch it was a joint initiative between WWF-South Africa, the Stellenbosch Rotary Club and the Stellenbosch municipality. Started in 2007 in Sydney, Australia, when 2.2 million homes and businesses turned their lights off for 1 hour, Earth Hour was this year observed by hundreds of millions of people globe wide. Even one of the world’s best lit places on earth, the welcome strip at Las Vegas, Nevada, went dark for an hour.

We enjoyed dinner from a special Earth Hour menu and were supplied with information regarding the Biodiversity in Wine initiative, as well as the SASSI seafood initiative. The event was peppered by the usual ironies of green initiatives. We had no vegetarian choices on our menu and the fish was not from the green list. Neither was there a single organic wine to be found. Pity also that many surrounding shops refused to shut off their lights, spoiling the effect for those sitting nearby. 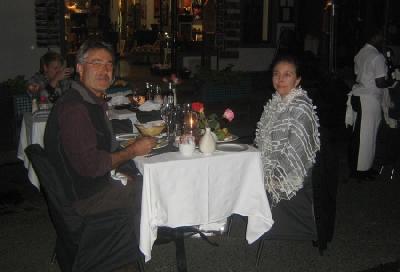 Yet walking along the snake of white clothed tables, people huddled around in earth discussions, felt deeply historical. And sitting in a circle of caring friends under the watchful stare of 2 of the country’s building elders – the Hofmeyer Hall and the Moederkerk – I realized that the world is indeed waking up. Hopefully this was one of the turning points in the history of this planet and this town, as people dispersed determined to change their lives.