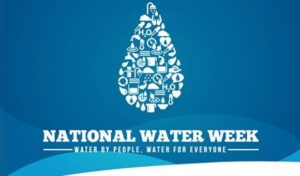 ‘Water for Cities – responding to the urban challenge‘ is the theme of United Nations’ World Water Day, to be celebrated in Cape Town from 21 to 22 March.

This coincides with South Africa’s National Water Week, running from 22 to 27 March. Organized by the Department of Water Affairs, it aims to raise the awareness of water issues and promote more sustainable methods of conserving water.

The estimated number of people in the world by 2050 is 9 billion, which means competition for scarce water resources is rapidly increasing.

About 8 million people still have no drinking water in South Africa. An exhibition on the importance of water conservation will be held in Khayelitsha this week. See our calendar for more information on the week’s events here.

How does global warming impact our water resources?

The impact of global warming has importance for the planet’s hydrological cycle. The volume and timing of water flows within individual ecosystems is affected by disturbance to rainfall patterns and accelerated thawing of glaciers. Water quality in coastal regions will be prone to saline intrusion as sea levels rise.

Some regions are becoming wetter and others drier; unfortunately the ‘losers’ in this transition are the poorer countries. Over one billion people already live in regions classed as arid or semi-arid. According to a 2009 World Bank estimate, the costs to developing countries for water-related climate adaptation, excluding coastal protection, will fall between $14-$19 billion per annum.

South Africa’s available freshwater resources are already almost fully-utilised and under stress. It is unlikely that the projected demand on water resources in South Africa will be sustainable. Water is increasingly becoming the limiting resource in South Africa. Supply is becoming a major restriction to the future socio-economic development of the country, in terms of both the amount of water available and the quality of what is available.

Among the factors affecting water availability are:

Where will we find water?

South Africa is looking towards water sources in other southern African countries (e.g. Lesotho) to assist in providing sufficient water for projected future demands. However, the risks of international dependency on such a priority resource are high. Other possible sources of water, such as desalinisation plants have been developed in Kenton-on Water, Knysna and Plettenberg Bay.

It is imperative that South Africa develop both a water-efficient economy together with a social ethic of water conservation and ultimately a culture of sustainable water use. An improved understanding of the right to water could translate into wider citizenship movements to bring local and national governments to account.

It takes 3.5 litres of water to produce a 1 litre bottle of water.

It is possible to drink water that was here in the Dinosaur era.

Some cool water initiatives and solutions

The Two Oceans Aquarium and For Love of Water (FLOW) and have collaborated to create ‘a national movement that is raising awareness, advancing education and inspiring action across all sectors of society by instilling a deep appreciation, understanding and respect for water.’ They provide opportunities for children from previously disadvantaged backgrounds to visit the Aquarium and participate in hands-on water-related activities through their Adopt-a-School program.

Insufficient or absent sewage systems are a major threat to our rare water resources, as raw sewage ends up in our dams, rivers and ocean. Did you know that only half the South African population has access to flushing toilets? Everyone deserves a dignified system in place, and we are excited about the newly announced End Public Defacation Project which was launched in Cape Town this weekend.

Yet flush toilets may not be the answer. These devices use at least 8 litres of water per flush. On a water strapped continent like Africa the mere practice of flushing loos with drinking water must be one of our most insane habits. There is not enough water in the country to be able to supply everyone with such a wasteful device. After all, simply moving waste from one spot to another, using our most critical resource and so contaminating it, is not an optimal system. Waste needs to be put to good use. Totally new systems are now needed.

A researcher from Cambridge University, Nate Sharpe, invented the ‘People Powered Poo Pump’. A bicycle-powered system that sucks latrine waste through a hose into a bucket. This eco-friendly sewage removal system has numerous health benefits. The waste can be used in bio-digesters for heating and electricity production in slums around the world. Here we are looking at waterless or composting toilets.

Sharpe is also working with Sanergy, an organisation set up by students at the Massachusetts Institute of Technology’s Sloan School of Management, which builds low-cost toilets in slums such as those in Nairobi, Kenya and franchises them to local people. Sanergy then collects the sewage each day and converts it into biogas and fertilizer.

Fresh water is purified and pumped around a massive distribution network which requires a high energy use. Why flush your toilet with it? Water previously used for washing dishes, vegetables, bath or shower water, known as grey water, can be harvested both manually and automatically. A utilizing system can be used to redirect grey water to your toilet cistern. This can be achieved by diverting grey water to a storage tank, using it to feed the toilet cisterns. For further information on how this can be achieved visit Big Green Idea.

Grey water systems capture water from around the home and reuses it to flush toilets – perfect for converting to an eco-toilet! The black water recycling system incorporates 3 chambers. The solids accumulate at the bottom of the tank and the clarified water then passes to the biological reactor, where it is treated to remove dissolved constituents. This is treated aerobically to such a high standard that it is usually acceptable to discharge directly into the watercourse (or used to water the garden!). 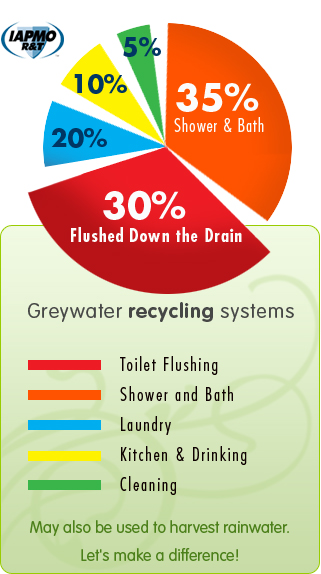 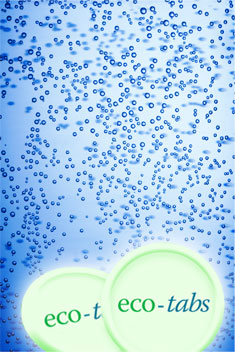 When applied, the tablets change the surrounding environment for proper bacteria germination by supersaturating the area with oxygen, neutralizing the pH levels, and adding nutrients; all in one application. Eco-tabs use can be used safely for re-using water around the home.

You can build your own compost loo using The Humanure Handbook or purchase a ready-made structure. Compost loos are a great way of converting human waste into organic fertilizer for the garden. Sawdust is often used as a bio-filter after each use.  Once the toilet is full, the waste can be emptied onto the compost heap, covered with food waste and fresh straw. 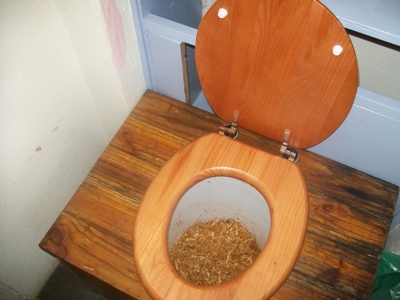 The use of straw and sawdust prevents any smells from escaping. After a few days the pile should begin to steam, and will be ready to use within 6 months. A family may fill a bucket a day, which could be added to a bucket of kitchen waste. To order a compost loo or for further information contact Derek Gripper. 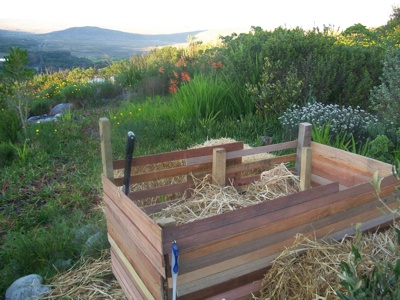 Collect your latrine waste and convert it into biogas for the kitchen. It comes in different shapes and sizes depending on your need. Organic materials that are high in energy and easily digested can also decompose anaerobically. Plant material is slow to digest, which can cause problems. Avoid using unfriendly cleaning agents as these kill the anaerobic bacteria. If temperatures inside the tank reach temperatures below 20°C, production slows. You may need to heat the tank during colder months. Undigested material is a nutrient rich liquid great for plants.

Collect your precious rainwater in one of these rain water harvesters. This will allow you to ensure water security during the dry months of the year. Water tanks are manufactured to prevent sunlight penetration and algae growth. 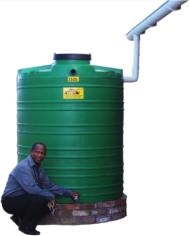 A variety of colours are available. One millimetre of rain on one square metre of your roof, equals one litre of water.

When you first turn on your hot water tap, it takes a while for the hot water to reach your tap – after all, it has to run all the way from your geyser. Litres of water go to waste this way. Now there is a clever device which collects this cold water – called ‘redwater’ – and prevents it from going down the drain. 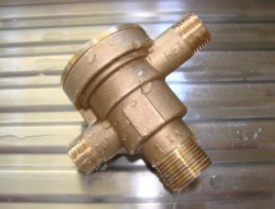 The water can be diverted to a rainwater tank, storage tank, garden or pond. It doesn’t require electricity to run; can be used with any hot water system; is compact and simple to use. You could save approximately 16,000 litres of water a year using this device. Read more here. 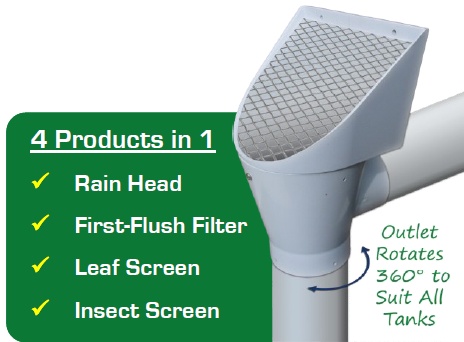 Capturing our precious rain water is an essential habit which we should all be getting into. In countries like Australia the government supplies them for free. Maybe one day we’ll see that happening here? But sometimes unwanted pollutants, such as, insects and leaves from your gutter can wash into your rainwater tank.

The superhead filter combines an adjustable first-flush diverter and rainhead that automatically filters and discards polluted rainwater to keep your tank clean. It helps to prevent damage and algae growth in your tank. 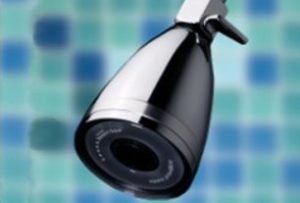 Most of our homes come with regular shower heads. That means each time you shower you may be using flushing up to 15-25 litres of this precious resourced down the drain each time you shower! There are many water saving shower heads on the market, but the king of the castle seems to be the one that oxygenates and pressurises the water so that 8 litres per minute feels like 18 litres a minute.

With the Oxygenics shower head you save money on your water and energy bill whilst still enjoying a great shower experience. So no compromise on performance, as is sometimes the case with such devices. There are various models you can choose from, including a 5 star model, which comes with a lifetime guarantee from clogging and corrosion. 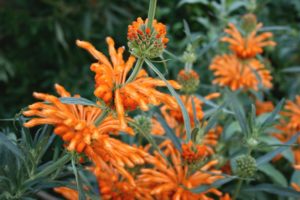 Wild Dagga is a firm favourite in South African gardens for its colourful flower display coupled with its ability to attract nectar feeding sunbirds by the dozen. It also flowers for many months of the year providing a long and rewarding display. Read more here.

Water wise gardening is all important

Indigenous plants prevent thirsty alien species from drinking all the water and spend less time watering the garden. Also make your own compost from your organic kitchen and garden waste. By composting your soil you add texture, which conserves water and of course adds nutrients. Irrigation should be done by means of a drip system and never mid-day. Explore organic or permaculture gardening systems.

Reduce the number of chemicals going down your plug hole and help keep the waterways clean. Cleaning products are harmful to freshwater habitats. Be sure to use only earth-friendly cleaning products.

More things you can do:

10 simple ways you can make a difference in your day to day routine:

For an extensive list of tips to protect our water supply the Department of Water Affairs has provided additional tips.

Remember to report the misuse of our water and other faults to the nearest municipal offices or call the Department’s toll free number at 0800 200 200.