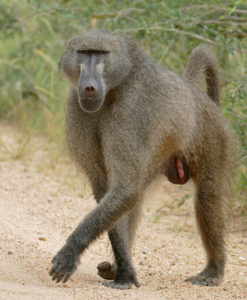 Chacma Baboons are the largest of the baboons. Here is a male in Kruger National Park. Image: Wikipedia

In 1998 the Chacma Baboons of the Cape Peninsula gained protective status. This status is now being overlooked with regards to repeat raiders and dispersing males, who are trying to leave the peninsula to join troops further inland. The city sprawl prevents them from following their natural route, and as a result they get stuck in the suburbs.

According to global civic organization Avaaz, The City of Cape Town and Cape Nature Conservation aren’t assisting them in their natural dispersion, or addressing management issues with residents who are responsible for the baboons losing natural habitat. Instead, they have authorised the killing of these healthy, strong male baboons.

Baboons are a highly adaptive species who in this case have naturally adapted to the human environment forced on them. They are not predators who view humans as a food source, but regard humans as another primate species with whom they are competing for resources. Their reputation as “dangerous” is mostly exaggerated due to the many myths perpetuated by our fears. The media with its reliance on sensationalism all too often plays on this, they say, keeping the public fearful and ignorant of the true facts surrounding this species.

Join the chorus of protest

So, says Avaaz, Cape Nature Conservation, the very people who should be conserving nature, are contributing to the destruction of the baboon species. By signing this petition, you can help call on the City to halt this unnecessary killing of our natural heritage and take the other valid, non-lethal options set out in the protocol, such as translocation, as well as placing more focus on education and awareness.