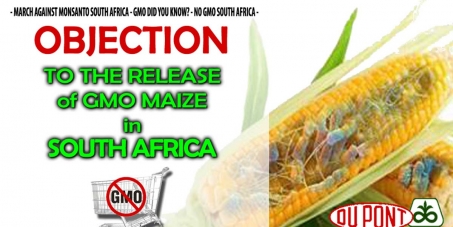 Now is the time to speak up if you want to stop the introduction of more GM maize into our food chain.  Du Pont Pioneer published an application in the Beeld newspaper for the intentional introduction/trial release of  TC1507 x NK603 and TC1507 x MON810 and TC1507 x MON810 x NK603. These maize lines express insecticidal proteins, including Cry proteins in different combinations, to protect against certain lepidopteran pests.

Avaaz has launched a petition to sign to encourage our government to reject this application. It reads as follows:

OBJECTION TO INTENTIONAL INTRODUCTION/TRIAL RELEASE OF GMOS IN SOUTH AFRICA.

As citizens who are concerned about the global controversies surrounding GMOs and agrichemicals. We object to DuPont Pioneer’s application in the Beeld on 13 March 2014 for intentional introduction/trial release of TC1507 x NK603 and TC1507 x MON810 and TC1507 x MON810 x NK603. These maize lines express insecticidal proteins, including Cry proteins in different combinations, to protect against certain lepidopteran pests.

WE DEMAND that you, the GMO Authority, once again uphold the well-being of the People and our environment over corporate interests.

WE URGE YOU TO:

You are the competent authority to receive and ADDRESS objections by stakeholders.

This peer-reviewed study published in the Journal of Hematology and Thromboembolic Diseases in December 2013 indicates a definite Risk of Harm –‘Hematotoxicity of Bacillus thuringiensis as Spore-crystal Strains Cry1Aa, Cry1Ab, Cry1Ac or Cry2Aa inSwissAlbino Mice.’

“In conclusion, results showed that the Bt spore-crystals genetically modified to express individually Cry1Aa, Cry1Ab, Cry1Ac or Cry2A can cause some hematological risks to vertebrates, increasing their toxic effects with long-term exposure”. http://www.gmoevidence.com/wp-content/uploads/2013/05/JHTD-1-104.pdf

Until completion of this objective, scientific study, the GMO Authority should place a moratorium on all previous approvals and new applications involving the NK603trait. Any other decision would be tantamount to negligence of your duty and bring into question your competency as the GMO Authority.

Risk to food security is clear

Other pests are doing the same. The risk of imminent economic devastation is clear. The risk to food security is clear.

There is no lack of scientific evidence here. So how will this be controlled? More toxic chemicals? Who benefits? The Chemical Companies! These chemicals end up in our bodies and environment.

A Report by Topsy Jewell and David Buffin, PAN UK ‘Health and environmental impacts of glufosinate ammonium’ concludes that glufosinate is a neurotoxin which can cause serious damage to growing foetuses and is toxic to beneficial soil micro-organisms: http://www.foe.co.uk/sites/default/files/downloads/impacts_glufosinate_ammon.pdf

Public unaware of the risks

We note the total negligence of the GMO Authorities to educate the general public on the RISKS of GMOs and agro-chemicals. GMO’s have been sneaked into our food without our knowledge or informed consent.No effort is made to stop the industries from misleading the public with their propaganda, unsubstantiated claims and misleading advertising.

ASA recently withdrew Monsanto adverts from all radio programs – for the third time in SA: http://www.acbio.org.za/index.php/media/64-media-releases/454-monsanto-forced-to-withdraw-unsubstantiated-and-misleading-advertising-claims-on-benefits-of-gm-crops-advertising-standards-authority-of-south-africa

Despite industry promises, they have failed to deliver on any of their claims. GM technology is defective. Weeds and insects have developed resistance to chemicals, resulting in the use of more chemicals and chemical cocktails.

‘Impacts of genetically engineered crops on pesticide use in the U.S. — the first sixteen years’ a publication by Charles M Benbrook in the Springer Open Journal Environmental Sciences Europe.

More GMOs lead to resistance and hence higher use of herbicides

“Contrary to often-repeated claims that today’s genetically-engineered crops have, and are reducing pesticide use, the spread of glyphosate-resistant weeds in herbicide-resistant weed management systems has brought about substantial increases in the number and volume of herbicides applied.” http://www.enveurope.com/content/24/1/24

“Resistant weeds have become a major problem for many farmers reliant on GM crops, and are now driving up the volume of herbicide needed each year by about 25%.” http://www.nlpwessex.org/docs/benbrook.htm

GM seeds are experimental products made by man in laboratories.‘Safety’ tests by industries which profit from these GMOs and agrichemicals are biased, voluntary, often manipulated, inadequate, plagued by conflicts of interest and lack of transparency. Thalidomide and Asbestos are grim reminders of industrial deceit.

The responsible authorities lack the capacity to monitor and test for GMOs and pesticide residues in Food and Feed. There are no GE FREE Zones in South Africa and limited segregation between GM and non-GM crops. Few non-gmo alternatives are locally available. Labelling regulations are weak and food industries are not even complying with them.

Even if the regulations were strictly enforced for ALL GMOs in the food and feed chain, consumers are deprived of their right to make informed choices.

Statistics for cancers, tumours, immune-deficiencies, obesity, diabetes, birth defects, neural, psychological, cognitive and developmental disorders, and allergies etc. are increasing, especially in children, as well as reproductive problems and infertility. Is there any department in South Africa investigating the possible causes? GMOs and increased use of agrichemicals may be a likely contributing factor.

GMOs are heavily dependent on the oil industry, therefore unsustainable.

Small to medium farmers cannot afford the technology, so it is not of benefit to them and does nothing to develop real food security. Seeds, which were conventionally bred by farmers, are now controlled by a handful of multinational corporations who genetically modify for herbicide tolerance and insect resistance, and patent them. Commercial uniformity reduces seed biodiversity. Contamination of non-GMO crops is guaranteed. Pesticide residues accumulate in the environment, contaminate soil and water and threaten our biodiversity. Feeding studies on animals indicate severe negative health impacts. In light of the growing global rejection of GMO products, it makes economic sense to develop agro-ecological or organically grown goods for local market and export, where supply cannot keep up with the growing demand.

This petition is address for the attention of: