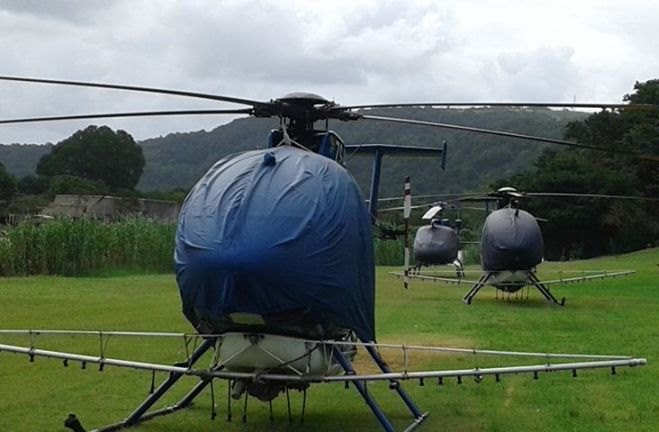 There is a pervasive attachment to ignorance when it comes to ‘weed control’ in this country. Now in the Transkei this shortsightedness threatening vast tracts of ecosystems and the people living in or near those areas.

Here is an Avaaz petition against an initiative that needs to be stopped.

The other day I visited an expensive lodge on the other side of the Mzimbubu river, Port St. John, where I found the 3 spray-copters in the photo. Apparently they are using Round-Up Ultra (the new Agent Orange), from Monsanto to kill thousands of hectares of Cannabis on the remote steep slopes of the Transkei. The spraying will continue until April, March when the crop is harvested.

When these choppers spray large areas of soil they not only destroy these valuable crops, but also entire eco systems- the land then looses much of it’s top soil and when it rains the rivers carry thousands of tons of rich fertile soil into the ocean. This soil loss is also caused by poor planting methods and over-grazing – mostly by goats.

The Transkei is a particularly poor part of SA with many people struggling to subsist ….. hence the high crime rate ……which in turn discourages tourism – it’s a vicious circle! These coppers not only spray fields but also people and animals. IT CAUSES CANCER!

The pilots tell heart-rending stories of entire villages on their knees, beseeching them not to spray, and of one old woman hobbling into the fields waving a white flag. Much of Port St John’s and Lusikisiki’s economy is dependent on the growing of this indigenous ‘weed.’

South Africa is a signee to various International anti-drug agreements and the spraying that occurs twice annually is apparently funded by UN and UC. The local communities vote for a national governance that makes agreements with foreign nations to destroy one of our most valuable crops…..

Smoking Cannabis is an African tradition. SA is the biggest producer of Cannabis in the world and also the biggest consumer. Most of the high grade outdoor strains are grown in the Transkei and much of it is exported.

Besides being economically viable for the people of this region, Cannabis and Hemp offer many medicinal and other benefits to humanity and the global eco-systems.