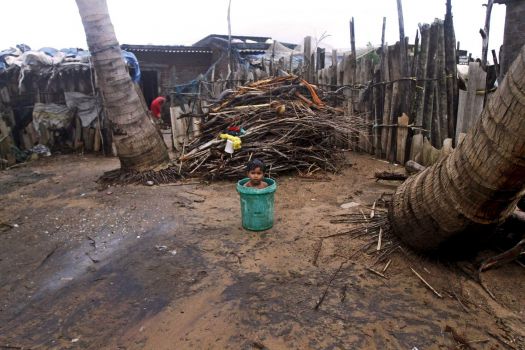 A powerful cyclone was pounding a large swath of India’s eastern seaboard with heavy rain and strong winds on Sunday, killing at least six people and causing major damage to buildings and crops, in one of two storms lashing Asia.

In Japan, at least 35 people were reported injured as Typhoon Vongfong, packing winds of up to 180 kilometers (110 miles) per hour and heavy rain, hit the southern island of Okinawa and was aiming at the island of Kyushu, where authorities told 150,000 people to evacuate.

Cyclone Hudhud had winds of 195 kilometers (120 miles) per hour when the edge of the storm hit land after sweeping through the Bay of Bengal, Chief Staff Officer of India’s Eastern Naval Command Rear Admiral S.K. Grewal told reporters. The cyclone’s wind speed dipped to about 160 kph (100 mph), but was expected to pick up again later Sunday, he said.

Experts said the storm was likely to cause widespread devastation along nearly 300 kilometers (185 miles) of India’s east coast.

A statement by India’s Home Ministry late Sunday said that the cyclone left at least six people dead __ three in Andhra Pradesh state and another three in neighboring Orissa state. Also, the communication services and the supply of electricity have been considerably hit in the region, it said.

It also said that a detailed assessment would be carried out as soon as the wind speed is reduced and the roads are cleared. The wind speed is expected to go down to 60 kilometers (40 miles) per hour by Monday morning.

At least 400,000 people were evacuated from the coastal areas of Andhra Pradesh and Orissa states ahead of the storm, and hundreds of shelters were set up to house them. Visakhapatnam, one of the largest cities in southern India and a major naval base, was bearing the brunt of the cyclone’s fury. 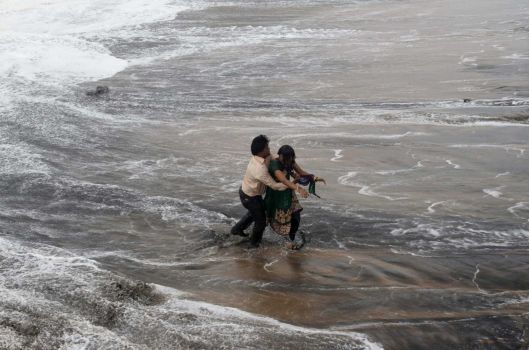 Four districts in Andhra Pradesh that are home to more than 14 million people – Srikakulam, Vijayanagaram, Visakhapatnam and East Godavari – were likely to be worst hit, including about 350 coastal villages.

The deaths were caused by wall collapses and toppling of trees, officials said.

Andhra Pradesh’s chief minister, N. Chandrababu Naidu, said that while the early evacuations had saved lives, the cyclone caused “huge damage” to buildings and crops in the coastal districts.

Grewal said 30 diving and 20 rescue teams were on standby. Hundreds of rescuers from India’s National Disaster Response Force were also spread out across Andhra Pradesh and Orissa.

India’s meteorological department said Sunday afternoon that the cyclone would weaken over the next 12 hours, with wind speeds gradually decreasing. But heavy rain was expected to lash Andhra Pradesh and Orissa for another three days. Other parts of central and northeastern India were also expected to see heavy rain. 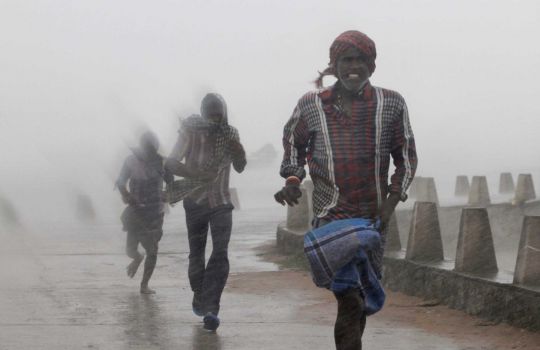 The Indian Ocean is a cyclone hot spot. Of the 35 deadliest storms in recorded history, 27 have come through the Bay of Bengal – and have landed in either India or Bangladesh. In 1999, a cyclone devastated Orissa’s coastline and killed at least 10,000 people.

While India has a disastrous record of response to natural calamities, it managed last October to safely evacuate nearly a million people out of the path of Cyclone Phailin, the strongest tropical storm to hit India in more than a decade. Phailin destroyed hundreds of millions of dollars’ worth of crops after it made landfall in Orissa, but claimed only about 25 lives.

West Japan Railway Co., which operates trains in central Japan in the area surrounding the ancient capital of Kyoto, said that some train services would be shut down starting Monday afternoon because of the typhoon, and that the disruptions could continue through Tuesday.

The U.S. military on Okinawa, where last week’s typhoon killed three U.S. airmen who were washed out at sea, instructed personnel and their families to remain indoors Sunday until strong winds and rain subsided.