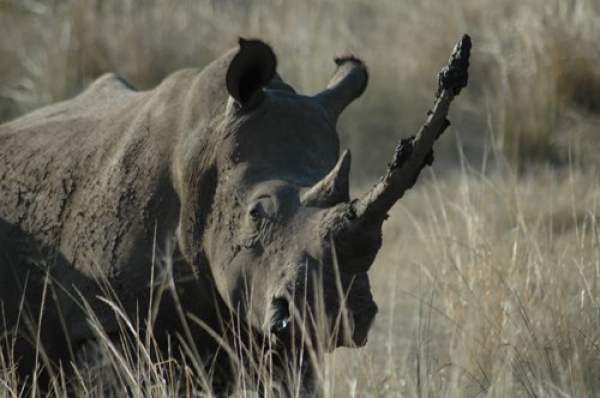 Two weeks into the New Year and already 11 rhinos have been found dead and dehorned in the Kruger National Park (KNP).

Just hours after 2 suspected poachers were killed in the KNP, 3 more rhino carcasses were found on Thursday 12 January bringing the total rhino killings for 2012 so far, to 11.

Following the gruesome discovery of the 8 adult rhino carcasses found in the southern section of the KNP on Tuesday, game rangers conducted an anti-poaching operation in the park on Wednesday night, resulting in the killings of two suspected Mozambican poachers.

Yet several hours after the shoot-out, 3 additional carcasses were found along with a 375 rifle and other hunting equipment during an aerial search, SA National Parks (SANParks) spokesperson, Reynold Thakhuli said.

“SANParks regrets the deaths of the suspected poachers. A gunfight ensued and two of them were shot dead. Others managed to escape. We suspect they might have fled to Mozambique, as the area where they were ambushed is close to the Mozambican border,” said Thakuli.

Meanwhile, another two suspects who are believed to be linked to the recent rhino killings have been arrested.

Minister of Environmental Affairs due to address poaching

The Kruger National Park is one of the country’s top tourist destinations and has been hit hard by poachers. 252 rhinos were killed in the Park last year – more than half of the estimated 450 rhinos killed nationwide with 333 in 2010.

The dramatic spike in rhino killings has sent shockwaves through the country. Due to the outrage of concerned citizens and the media alike Minister of Environmental Affairs Edna Molewa has agreed to address rhinos poaching and the way forward in a public meeting in Pretoria on Sunday.

If you, like us, want to save the rhino from extinction and see urgent action taken against the poachers – sign the petition “We demand and expect that South African Government act immediately and decisively to end rhino killing carnage and avert imminent rhino extinction.”

The goal is to reach 250,000 signatures so please spread the word!