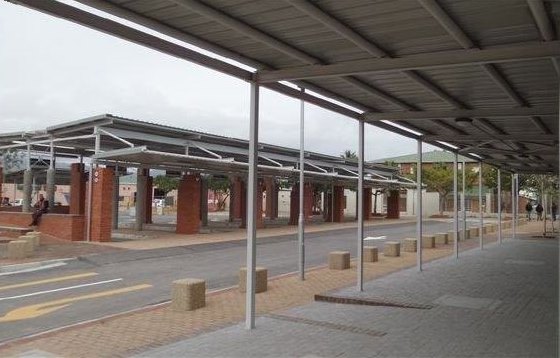 Think of a sustainable public transport facility with solar panels on the roof, washing facilities for minibus-taxis, kiosks for informal traders, and bathroom facilities for commuters! This transformation happened to an informal taxi rank opposite the Nomzamo Community Hall in Lwandle, Somerset West.

This is the City of Cape Town’s second green taxi rank following the one established in Wallacedene.

According to  the City, previously minibus-taxis at the informal rank in Nomzamo operated from a potholed asphalt surface with inadequate food and seating facilities, no bathrooms and very little shelter against the elements.

From potholes to solar panels

Since the opening of the new taxi rank on 17 August 2015, at least 115 minibus-taxis have been operating from this facility opposite the local community hall just off Michael Street, transporting more than 20 000 local residents to destinations in Somerset West, Gordon’s Bay, Heldervue, Strand and Stellenbosch each week. 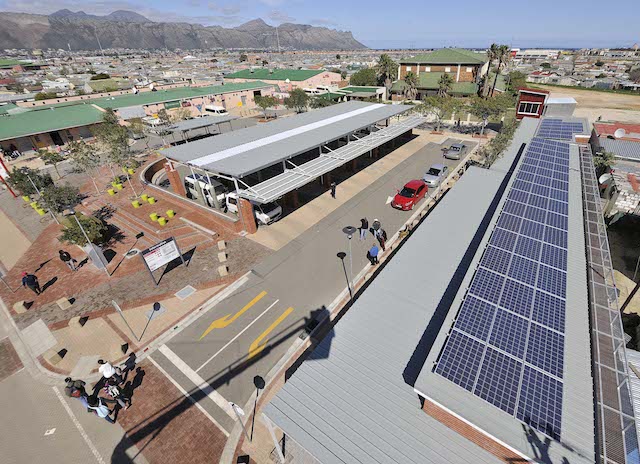 ‘When Lwandle was established in 1958 by the then apartheid government to accommodate the workers for the nearby fruit and canning industry, no effort was made to provide the migrant workers with decent public open spaces and facilities. Given the township’s history, rapid development and the increase in the population in Nomzamo, there are few open public spaces where residents can get together. Thus, when Transport for Cape Town started drawing up the plans for the taxi rank, we kept in mind that the residents of Nomzamo would not only use the facility for boarding a taxi, but that it would soon also become a meeting place for socialising, eating and shopping,’ said Councillor Herron.

‘A wash bay, accommodating two minibus-taxis at a time, has been constructed. It is fitted with an overhead canopy and metered water supply, as well as an underground oil separator, preventing oil and grease from entering the sewer system. This is a great business opportunity for a local entrepreneur who wishes to operate from the facility,’ said Councillor Herron.

‘Following on from our first ever green taxi rank in Wallacedene, Nomzamo’s taxi rank also uses a rooftop solar photovoltaic panel system for electricity generation. There are 68 solar panels on the roof, arrayed at optimum orientation to the sun. The solar panels provide sufficient electricity for the office building and 16% of the entire facility’s electricity during the peak periods, inclusive of the trading kiosks. As is the case in Wallacedene, the taxi rank in Nomzamo will soon be equipped with batteries for the storage of reserve solar electricity to be used at night or on cloudy days, ensuring it can operate completely off the electricity grid,’ said Councillor Herron.

Until such time as the taxi rank operates completely off the electricity grid, the City will still see huge savings in electricity costs.