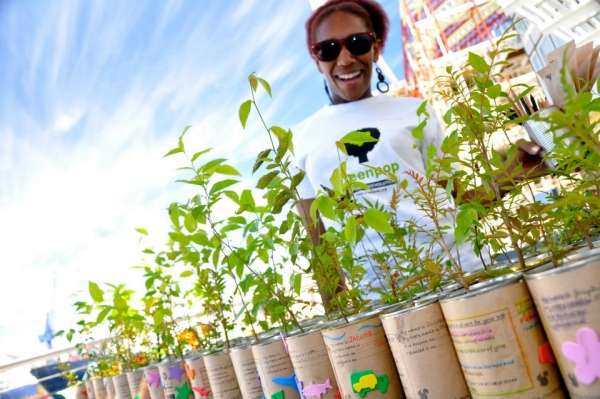 On Saturday 27 October 2012, Greenpop hosted the Sustain our Africa Youth Summit at the V&A Waterfront. 187 eager learners from 4 of Greenpop’s top performing beneficiary schools came out for the day of green learning. We had learners from St Augustine’s Primary School in Ravensmead, Surrey Primary in Manenberg, Clarke Primary in Elsies Rivier and Kalksteenfontein Primary in Elsiesrivier.

The day began with a presentation – the theme being, “Cooling the Planet is Cool” in the Nedbank Auditorium. Lauren O’Donnell from Greenpop says, “It was amazing to see so many children excited about a cooler future. I believe that sustainability can be popular and fun and Saturday showed me that we have some very cool, passionate and green leaders coming up in South Africa.”

The Chavonnes Battery Museum Guides, dressed in period costume presented a short introduction and took the kids on a guided tour of the museum. After a refreshment, they were ready to rush to the Pavillion Conference Centre to get to their activities, kids hurried upstairs to sort into their morning activities; Sapling Planting, Mural Painting, Solar Cooking, Dance & Theater, and Recycled Art & Crafts. Teachers and chaperones from the schools watched on and took part in the activities with their students.

Serelene from Clarke Primary explains, “It’s really exciting to be here today. I’ve learned a lot about working with the children. They are learning new stuff about how to be creative about being green and at our school, it will help a lot for them to learn about the trees and be helpful with the caretakers. From here I know we will be more green and waste less.” 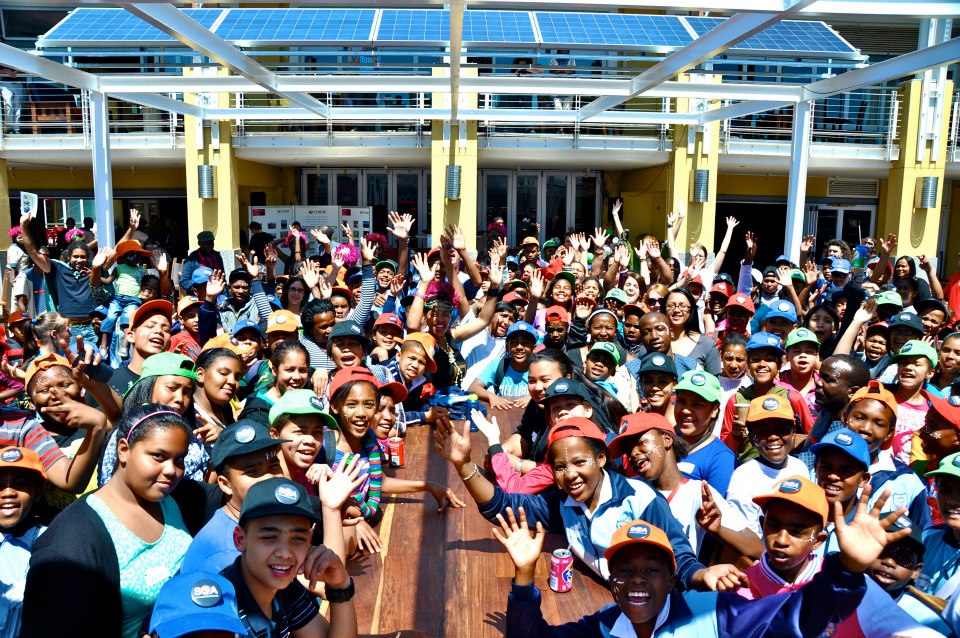 Thank you to See-Saw-Do for their creation of our mural for the day. A well-planned, 8-panel outline allowed learners to paint following a blueprint. From there, kids filled in speech bubbles with green pleas in the voices of the newly painted colorful animals, co- existing with humans.

Jeremy Puren from See-Saw-Do expressed, “I think today turned out really lovely and I think the one part that came out really nicely through all the projects, especially with our painting project, is that we all need team work. We all need to work together to make a change. It’s possible to make a difference. Today was great to see the children work together towards a common goal and then in the end, hopefully when they see this message pulled together, it will stick in their minds. Each one can play their role and make a major impact.”

The sapling-planting group learned about the trees each student planted. They were given the scientific names of the each of the saplings, but were also given the chance to name their own tree and make it their own. By decorating the donated Recycle 1st tin can and planting a tree for another student, the group managed to plant and decorate 200 saplings – ready to be taken home!

Thembi Mashabane, a Greenpop employee co-running the Sapling planting group talks about the initiative, “At Greenpop we use the mantra, ‘The best time to plant trees was 20 years ago, the next best time is now,’ it’s always great to get kids involved and for them to get their hands dirty. By planting the saplings today, we’ve not only taught the kids about proper tree care, but have personally planted 200 trees. It’s great to see how excited the kids are to get involved and it was great of SoA to give us a platform from which to do this.” 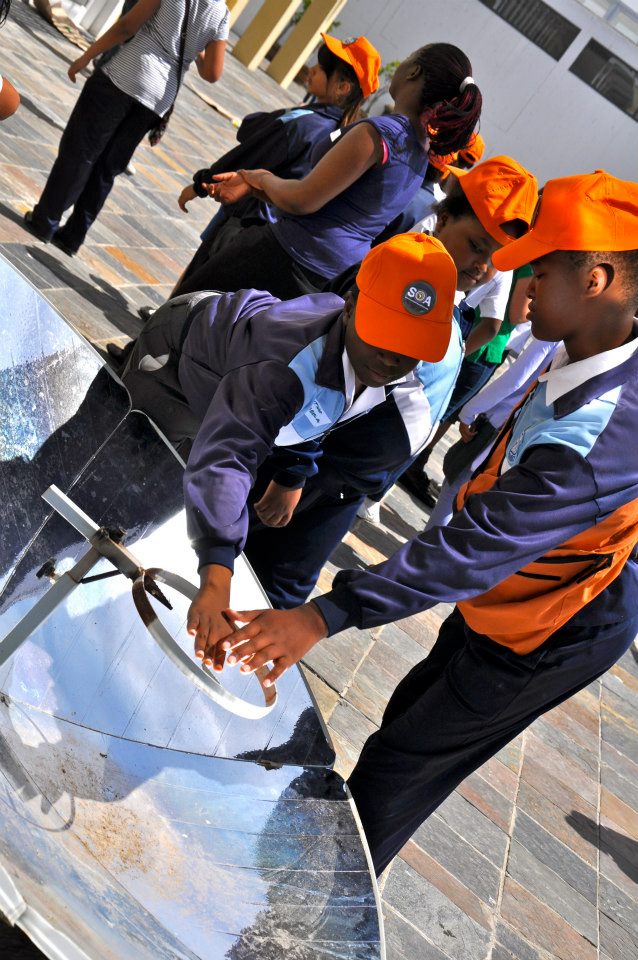 The Solar Cooking group taught the learners the power of the sun. Students witnessed a powerful parabolic solar cooker from SunFire solutions (http://www.sunfire.co.za/) boil a pot of tea, and then a homemade version cook a pot of rice. From there the students were split into smaller groups to create their own solar cookers from old cardboard boxes and used chip packets they had brought in from their school grounds. Eight solar cookers were made on Saturday – renewable solar power in action!

Georgie Campbell, one of the Solar Cooker group leaders was impressed by the students’ energy about the project, “I have enjoyed seeing some of the kids taking leadership in the little groups, being really passionate about the environment. I’ve been doing the solar cookers and some of them already knew why the solar cookers are shiny or why we used the chip packets. The knowledge was overwhelming. I was impressed at how knowledgeable and excited these children are. It’s exciting.”

Thanks to Mfusion Danz for putting on our Dance and Theater workshop. The dance and theater workshop got the kids up and moving to the sounds of Bob Marley. Mo from Mfusion explains how dance and theater can play a part in greening and the theme of cooling the planet, “I love working with kids, firstly. I’ve worked with Greenpop before and my involvement is with music and body movement to convey messages. Whether it’s about trees or other environmental messages, you can convey messages through body movement.” Using recycled and impromptu instruments, the learners planned and practiced their plant dances to perform them for their peers at the end of the day.

She explains what she hopes the students took away from the day: “I think what has been done today is very important in imparting knowledge to them [the kids]. They were taught today how to recycle and how to make stuff [from the recycled waste]. I’m sure … [the students] will take it in and take it back to their communities and their schools as well. So, I’m really encouraging them at today’s event. Waste is useful and can even make you money if you are creative.” 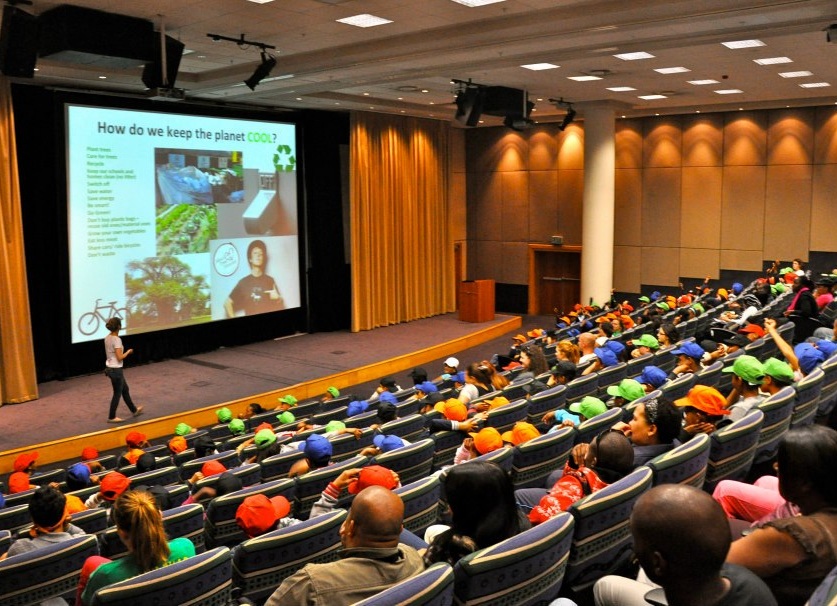 Halfway through the day’s activities, students headed down to Moyo for lunch and a fun-filled hour of entertainment- including dancing a face-painting with Moyo’s dancing and drumming team, before headed back for the learner’s afternoon activity.

At the end of the eventful day, students gathered once again in Nedbank Auditorium for final remarks and to present what they had learned. Student presentations ranged from Mfusion Danz’s choreographed performances to a student-created rap from the sapling planted group about trees.

“Today was an awesome day because I experienced a lot of things. What I took in consideration was that, even littering can harm our planet.”
-Nastassjia Van Wieling, Grade 7, St. Augustine’s Primary School

Once final remarks were said, students were given goodie bags and their saplings and headed home, thanks to HG Travelling Services for their reliable service – getting the kids to and from the Waterfront. A huge thanks to City of Cape Town Youth Environmental Schools (YES) Programme for sponsoring the transport for the day.

We would like to thank all those who sponsored and were involved in the Sustain our Africa Greenpop Youth Day.

1. Thembi from Greenpop with the saplings planted by the school learners

2. Lunchtime at Moyo with 187 green learners.

4. Lauren O’Donnell from Greenpop talking about why Cooling the Planet is Cool.

Check out more photos on Facebook, or head over to the official site.