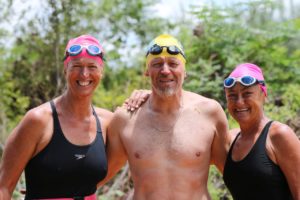 This formed part of their broader Swim for Rivers campaign, which aims to raise awareness around the poor state of our country’s rivers and to highlight the urgent need to restore them.

The swimmers had originally planned to tackle a 50-60km stretch of the Wilge River in Gauteng, however, after communication with farmers in the area, these plans were scrapped due to the severely polluted state of the river.

Amongst other pollutants, the Wilge River currently carries high levels of faecal coliform in the water – including E.Coli – due to runoff from the many farms, mines, and residential areas it flows through. 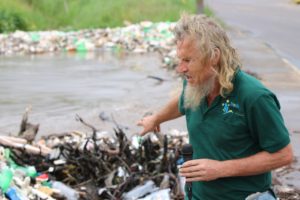 Willem Snyman from Fresh NGO, at the Hennops River cleanup near Centurion.

Although reluctant to compromise, the athletes decided to swim a cleaner section of the Wilge’s main tributary – the Bronkhorstspruit – to limit their exposure to significant health risks.

The swimmers set off from below the Bronkhorstspruit Dam wall, accompanied by a support crew of paddlers. While most of the route was swimmable, the signs of man-made pollution were inescapable along the way.

Says Chin: “We experienced the disconcerting paradox of swimming along beautiful stretches of water, then suddenly being confronted with entanglements of plastic pollution clustered around submerged objects, which quickly reminded us of society’s disregard for the health of our waterways.” 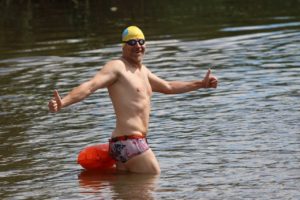 This swim marked the sixth event of the “Swim for Rivers” extreme swimming challenge that was launched by the courageous Capetonian in 2015. The challenge involves athletes attempting to swim a distance of up to 350km in a major river in each of South Africa’s nine provinces. The swims aim to spark debate about what the authorities and public can and should be doing to save our life-giving rivers.

As part of their river health awareness weekend, the group participated in a World Wetlands Day cleanup of the Hennops River in Centurion, at an event coordinated by Fresh NGO, a non-profit organisation that aims to clean up South Africa’s rivers, dams and water ways.

2020 Swim for Rivers has been sponsored by the 8 Mile Club and friends of founding swimmer Andrew Chin, and was supported by the Bronkhorstspruit Catchment Forum, Impact Adventure Africa and Media Ventures.