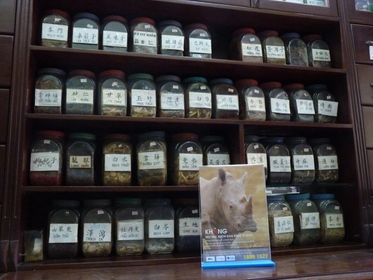 Rhinos are currently experiencing the worst poaching crisis on record, due to an explosion in the demand for rhino horn from east-Asian countries. South Africa has experienced a 7,500% increase in rhino poaching since 2007, with 1,004 rhinos poached in the country during 2013 alone.

From February 11-13, world leaders, government officials, conservation experts and wildlife organisations gathered in London to discuss the urgent action needed to clamp down on the illegal wildlife trade, which is driving animal populations to extinction.

Law enforcement efforts, along with action in on the ground are key, but the world is increasingly recognising that the battle against wildlife crime is not going to be won in range states alone – it is essential that we work towards reducing the demand for rhino horn and other wildlife products in Asian countries, particularly Vietnam and China.

Without a focused effort to address the main drivers of the current poaching crisis, enforcement actions will not be enough to save the rhino from extinction. As long as there is a demand for rhino horn, and consumers are willing to pay high prices for such goods, then criminals will find a way of evading the law, and the slaughter of wildlife will continue.

In Vietnam, evidence has shown that the fact that species such as rhino and pangolin are rare and illegal may only increase their desirability.

In Vietnam, consumption of rhino horn is no longer driven by traditional medicine use. Rapid economic growth in Vietnam has led to a diversification in the uses of rhino horn, from its promotion as a miracle cancer cure; its means of demonstrating wealth and social standing, and even consumption as a cure for hangovers. Research has shown that wealthy, urban educated men over 40 are one of the largest user groups of rhino horn.

Serious action is needed to reduce the consumer demand for illegal wildlife products and remove the perceived social status conveyed by using such products. Susie Offord, Deputy Director of Save the Rhino, says that new approaches are essential to reducing demand for rhino horn:

Demand reduction isn’t simply about raising awareness and preaching Western viewpoints. It is essential to use in-depth research and social science to understand the true motivations behind those using rhino horn.

We need to use this research to develop strategies to change behaviour consumption patterns, identify and work with key influential individuals and organisations  – to entice and encourage people away from using rhino horn.

Recent history has shown us that along with international pressure, activities to reduce the demand for rhino horn have been successfully achieved in other Asian countries such as Japan, South Korea and Taiwan. We are positive that this can – and will – be done again.

In 2012, Save the Rhino provided a grant of $20,100 to a local Vietnamese organisation called Education for Nature Vietnam towards its rhino campaign.

During 2014, Save the Rhino will be working further to develop its support for demand reduction campaigns in Asia.

You can now donate specifically to support demand reduction campaigns in Vietnam. Just select ‘Demand reduction’ from the drop-down list of projects on their donation page.