You are here: Home / Archives for COP22 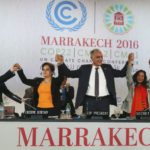 Nearly 200 nations agreed around midnight on Friday to work out the rules for a landmark 2015 global deal to tackle climate change within two years in a new sign of international support. At the end of two-week talks on global warming in Marrakesh, which were extended an extra day, many nations appealed to US President-elect Donald Trump, who has called climate change a … END_OF_DOCUMENT_TOKEN_TO_BE_REPLACED