You are here: Home / Archives for dictator 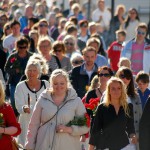 In 1989, Francis Fukuyama declared that democracy would eventually emerge as the universal form of human government. The intervening years have given ample ammunition to those who disagree. Indeed, the inexorable rise of China has led some to dismiss democracy’s messy compromises in favour of authoritarian efficiency. People are prepared to sacrifice their freedoms, the … END_OF_DOCUMENT_TOKEN_TO_BE_REPLACED