You are here: Home / Archives for droughts 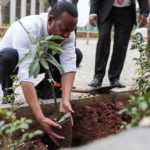 Ethiopia has planted more than 350 million trees in 12 hours, its government announced, claiming a world record. Across the country, volunteers took part in the mass planting as part of the “Green Legacy” initiative, a programme that aims to reforest large swathes of the land. The efforts far surpassed an original target of planting 200 million seedlings in a day. … END_OF_DOCUMENT_TOKEN_TO_BE_REPLACED